Mbabane River Clean-up Campaign in Swaziland for Season of Creation

Rev. Zama Sigudla who is the Environmental chaplain for Anglican Diocese of Swaziland shared a sermon where he stressed that to be a true Christian one has to take care of God’s creation. He stated that nature is waiting for the children  of God to be good stewards. He said to be a good steward it means  to ensure that river pollution must come to a stop as water is a basic resource for our living in the environment. We must also adopt  other green practices. After the clean up campaign a Eucharist service was held under a tree on the river banks.

Mr Msibi from Swaziland Environmental Agency  also stressed that river pollution and poor waste management is still a national crisis that we all need to take seriously. He appreciated the role played by the Anglican and Lutheran Church known as LUSHE in its role towards environmental protection. He encouraged  the movement to  stretc to other denominations and the entire faith community. 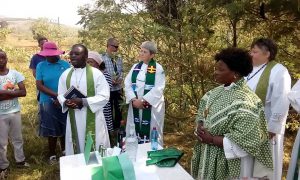 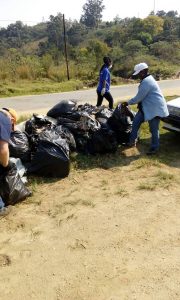 Samkelisiwe from the Municipality Council of Mbabane also appreciated the role of  the church in environmental protection especially waste management. She encouraged the church to participate even in other environmental protection aspects such  as back yard gardening which they are promoting as a council. She shared some manuals on green gardening to the Church to use especially with women and youth.