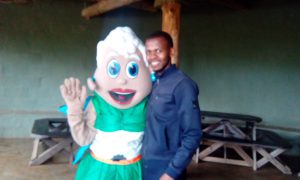 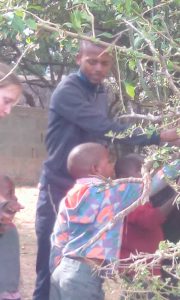 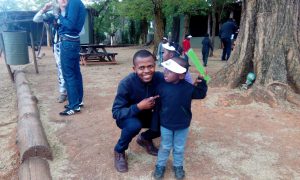 The Theme for World Environment Day 2017 was Connecting People to Nature and the Green Anglicans from Swaziland were certainly doing this! Mncedisi Masuku has become known as “Uncle Rhino” for his work with children. Two organisations, All Out Africa and the  Swaziland Environment Authority committed to  connecting children to nature. On Friday June 16, they took 51 children from the Neighbourhood Care Points (Pre-Schools/soup kitchen points) to Mlilwane Nature reserve  for a game drive to connect them with wild life. A wonderful day it has been as most of the children are from  disadvantaged backgrounds and have never had such an experience.

Mncedisi Masuku – “Uncle Rhino” was invited in this event to share some good time playing and singing with the little ones using the Green Anglicans Sunday School Manual, Ryan the Rhino. Uncle Rhino read a scripture from Proverbs 12:10 where is says that good people take care of their animals while the wicked do not.

He then shared a story about a King who killed all frogs in his community . The frogs were making a big noise and keeping him awake at night. . The village then became  full of mosquitos because the frogs that feed on mosquitos were killed. The moral of the story was that as little children we have to take care of the whole web of life. He then concluded by reading Psalms 24.1 that says the “Earth is the Lords and everything therein.” He then sang the song, “He’s got the whole world in his hand”.  then Uncle Rhino left the stage after dancing and singing. The presentation done by Mncedisi Masuku is taken from Ryan the Rhino of the Green Anglicans…