Cape Town is facing the worst drought in one hundred years. We are facing the possiblity of  “Day Zero” when the taps would be turned off and 3 million people queue for water. The Diocese of Cape Town in response has decided to dedicate the Lenten Period to focussing on Water (in)justice.

Materials for the Lenten course have been produced, scientific input, theological input, liturgical resources and Bible Study materials. The themes covered are : Sacredness Sustainability, Sanitation, Scarcity, and Biodiversity. The materials can be found at Lent 2018_Water (In)Justice Liturgical Resource 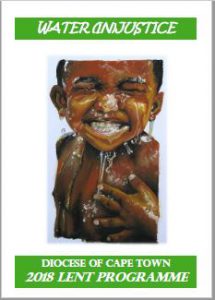 1 thought on “Lenten Materials on Water (In) Justice”