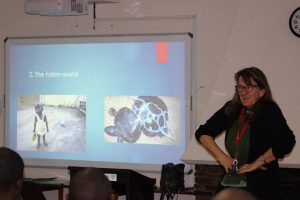 As the College of the Transfiguration celebrated their 25 year anniversary, one of the topics of discussion was “Anglicans and the Environment”

The first session led by Rev Dr Rachel Mash, Provincial Environmental Coordinator,  was dedicated to the issue of Water Justice.  There are 722 verses I the Bible that talk of water and yet only a handful had ever heard a sermon on water. We are baptised into the family of God through the waters of baptism and we do not know “our Jordan river”.  Over the years to come we will see an increased shortage of water in some parts of Southern Africa and worse flooding in others – climate change is super-charging the weather. Sea level rise threatens some of our key cities such as Maputo, Durban, Cape Town.

The students decided to do what they could do be earthkeepers and reduce their water usage at college – areas highlighted were the use of washing machines which were not full – they committed  to share with colleagues, reducing shower times and several other actions

“When believers in Jesus accept that the word says about our role as earth keepers (and water savers), and we cherish, respect and honour water as gift of God that has been freely given to us, we will find our reservoirs full, spiritually and literally.”

The second session looked the theology of caring for Creation. Our theology has often given us the impression that we are separate and superior to the rest of creation and that nature if ours to use and abuse. The current generation is being called to be healers of the Earth, for the older generation has failed in its call to be stewards of creation.

“I brought you into a plentiful land

to eat its fruits and its good things.

But when you entered you defiled my land,

“Not only that, but all the broken and dislocated pieces of the universe – people and things, animals and atoms – get properly fixed and fit together in vibrant harmonies, all because of his death, his blood that poured down from the Cross.” Colossians 1: 20 (The message)