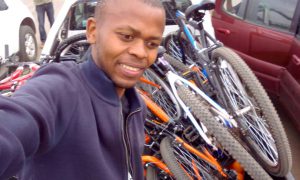 Different African Countries has made pledges to the UNFCCC when documenting the Nationally Determined Contributions (NDC). The conference equipped youth to take note of NDCs when doing anything on Climate adaptation and mitigation. It was noted that most African Countries had prepared a good NDC but little efforts has been done towards those NDC if not doing the opposite. African youth as current and future citizen of the continent are expected to do something in ensuring countries abide to what they pledged on the UNFCCC.

Among other topics discussed in the conference, gender issues when addressing climate change has been tabled as a topic of interest. Climate discussions should include man and women, children and youth and also people living with disabilities. In the discussion it was noted that woman interact with the environment more than men in Africa as they are the ones that does farming, fetch water and fuel for the family among others, therefore it is very important to include women in climate negotiations and any adaptation projects.

The last day of the conference was an amazing 2nd African and National Youth Agriculture Festival on Agribusiness under the theme, “Youth at the Centre of Agribusiness Revolution in Africa”. In this festival it was noted that the greater part of the African population is Youth but majority of farmers are people above the youthful age. This festival was encouraging youth to take part in Agriculture for the better future of the African Continent. Different Agricultural work done by Nigerian farmers were exhibited to showcase efforts already done youth and non-youth especially small scale farmers in the field of Agriculture. The festival was hosted by the Youth Farm (Yfarm) network which is an African Network encouraging youth participation on Agribusiness. Yfarm awarded best performing youth across Africa on different sectors of Agriculture. I encourage youth across Africa to get more information about this network on www.freshbrainsinitiativeng.com or email the CEO BARR. Nkiruka Nnaemego at fbinaiga1@gmail.com.

As an individual working on Climate Change and also working with Faith communities I was fascinated to see young people across Africa coming from different sectors such as research, agriculture, adaptation, government sectors with diversity in culture, educational background, religion and moral believes coming together in one voice. The voice was saying nothing else other than that Youth has a major role to play in mitigation and adaptation of Climate change and also taking action in Agriculture to make Africa come out of poverty. As a Young Green Anglican I encourage other Young Green Anglicans to take advantage of networking with other young people engaged on adaptation through the African Youth Initiative on Climate Change on the website www.ayicc.net and the Yfarm on the contact details above. The networks will connect you to different other networks across Africa.