Water in the Cistern

Whether it’s Moses striking the rock, or Jesus turning water into wine, or being baptised in the Jordan, water lies at the very core of our Judeo-Christian history; and so does our responsibility to care for God’s creation.

Mostly, we are pretty wishy-washy about all that; yes, it’s all true but somebody else’s job. But recently events on the planet are starting to force us to take note, or face huge wars over water, devastating climate change, worsening drought patterns in South Africa, and especially the impending Day Zero in Cape Town; a day which will almost certainly be repeated next summer.

Round the world both local government and industrial companies are starting to take responsibility for the supply of clean water but it remains hugely expensive and massively energy intensive; disposing of the salt creates environmental concerns too. The Conversation (February 8, 2018) outlines the pros and cons of desalination; the plant being built in Cape Town will produce 2000 cubes of water daily at a cost of R30 per kl.

Most of us feel helpless as the situation plays itself out in Southern Africa; we might put in a few water tanks to harvest rainwater, but it’s a drop in the ocean of our needs for clean water, and in any case it’s the dry season. What could we, and should we as Christians be planning on doing?

A sojourn in the Netherlands gave this Anglican family a different insight. It too has a biblical basis as found in Jeremiah; the prophet was imprisoned in a very deep cistern in Jerusalem used for collecting rainwater. Many of the older homes in Holland, before the reticulation of water became common place, built underground reservoirs for the harvesting and storage of rainwater; a simple old fashioned hand pump brought the water to the surface for use.

Harvesting of rainwater, stored underground has many advantages and none of the disadvantages of desalination. The environmental impact is positive, reducing storm water flooding. Underground the water is super cold and less prone to bacteria.

Whilst some authorities claim it’s not cost effective, at R30 per kilolitre I would dispute that; and in any case, Capetonians right now would accept clean water at any price. We harvest around 200 kilolitres per annum, times R30, means paying off our investment in five years; more important we have unlimited free water for most of the year. We consider our cost of R30,000, six years ago, to provide us with clean water, a great investment.

Maintenance of the reservoir is minimal, electrical costs to run a pump reasonable and, for the home, filtration and sterilisation simple; there is ample over for the garden, filling the swimming pool and washing the car. We have needed municipal water for only one month in six years at the height of the KZN drought.

Except for the pump all the materials are locally available; there would be no stress on our foreign reserves to build even 100,000 such reservoirs in SA. Six men built our reservoir in two weeks, digging the hole themselves; it would create employment for a significant number of people. The only skilled part of the exercise is plastering the walls; ours was less than satisfactory and it had to be lined with fibreglass. Of course, the reservoir must have a roof to keep light out.

Our reservoir stores 27,000 litres, which we supplement with three above ground fibreglass tanks; plastic doesn’t last. In the Cape, with a long dry period, I would make the reservoir 4m in diameter and 3m deep.

I envisage an NGO training teams of men to build underground reservoirs for homes and businesses all over South Africa; who is going to put their hand up? Yes, Lord, send me, I’ll do it. 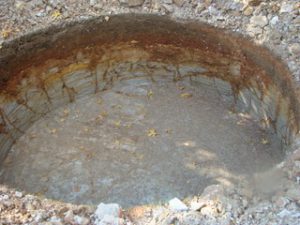