WED was the buzz word among the Sunday School teachers of the Bellville and Maitland Archdeaconries as they went about planning and preparing for this joint event. WED? Wednesday? Wedding? No! It was the acronym used for our World Environment Day exhibition, based on the Sunday School Syllabus, Ryan the Rhino. After months of communication, meetings, WhatsApp group messages and newly formed friendships later, it all came together on 3 June 2017 at 10:00 in the hall of the Good Shephard Anglican Church, Kensington.

After a banner procession by a few of the children of all the participating Sunday Schools, Rev Mash started the day’s proceedings, officially opening the exhibition, with a prayer. All the little children wearing animal costumes were invited to stay on the stage with her while she shared a story about the animals in God’s Kingdom. I am sure they felt very special to be part of Rev Mash’s story.

We were given a brief overview by Ncumisa Magadla, of Green Anglicans, who explained the reason for celebrating World Environment Day, making us aware of our environment and how to care for it. She also told us a bit about the Green Anglicans organization. For more information, log into their Facebook page https://www.facebook.com/GreenAnglicans/ and or their Website www.greenanglicans.org.

Both the children and parents could not wait to explore the exhibits, made of mostly recycled materials by the teachers, displayed on either side of the huge hall. We were taken back to the beginning of time to….

God’s creation! …. Night beautifully displayed with black material, hanging together with tons of toilet roll holders painted black, totally disguising the gazebo from which they were strung. The lengths of lights glittering in the background against the darkened sky perfectly reflected the sparkling stars of the night. The whole scene, with clouds ranging from light fluffy ones, pinned onto a blue curtained Day sky, alongside the bright sun, made from yellow painted toilet roll holders, to dark heavy clouds represented by black painted paper plates, hanging in the foreground, became so real with rain threatening to fall on the day, appropriately guiding us to….

Noah’s ark!……cleverly constructed with gazebos, draped animal print materials and cardboard boxes packed like building blocks in front, included spaces for windows through which the soft toy animals peeped. The opening in the middle of the Ark served as a door through which the children could enter. There was enough space for about 10 children, this being on the starboard side only! They sat on small old wooden chairs, which looked as original as the chairs which could have been used by Noah and his family themselves! The children watched short fun animated video clips, giving them ideas on how to look after our planet, Earth. Recycling, reducing and reusing. https://www.youtube.com/watch?v=zCfazf2gVuo. On the portside of the Ark, the children became engrossed in arts and crafts and had their faces painted in similar colours to…..

A rainbow!……made out of rows of different colours of painted toilet roll holders, arched above the ark, promised that there were lots more to meet the eye, as we gazed over to…..
A town, Cape Town!……. nestled under a mountain, Table Mountain!… built so big it would have touched the ceiling if the ceiling were not so high! Making our way to the taxi, made out of cardboard with lights that actually worked, a message pasted on the window read: “BE A GOOD STEWARD OF GOD’S EARTH WE WILL NOT GET ANOTHER ONE”. As we toured the rest of the exhibit past factories with smoking chimneys (paintings on cardboard stands) polluting the air. Stopping at Boulders beach, the penguins (made out of black sprayed 2 litre plastic bottles) surrounded by tins, paper as well as plastic bottles washed up from the sea (represented by blue plastic laid on ground). Making our way back past the overpopulated Hout Bay townships with refuse littering the streets, the reason for the message was clear.

We are destroying God’s earth and killing His animals and birds.
We were pleasantly interrupted periodically, during the course of the exhibition, by children displaying their talents, singing and dancing, some holding placards reminding us of the 3 R’s – REDUCE, REUSE, RECYCLE. One of the smallest children with the most angelic voice, confidently sang the song, “What a wonderful world” while one of the older children wowed us in a soulful voice, accompanied by her guitar, sang Earth Day https://www.youtube.com/watch?v=A4pLhvg_Zkk.

There were some fun interactive songs to which a group of children and Sunday School teachers acted on stage…Rev Mario had some fun performing too, after all, it was easy to do!
REDUCE, REUSE, RECYLE too…. https://www.youtube.com/watch?v=1CvYayV88kY come on everyone, it’s easy to do!

Lets go green and become GREEN ANGLICANS for Christ….. https://www.youtube.com/watch?v=U3ZK5pntyNg
These songs are a reminder of the Earth we had, what we have and how we should strive to save our planet, Earth. Our children, God’s children, are asking us to save our Earth, our World, Gods Earth, God’s World, for future generations. Will you?

Photo credits by Brigitte Wingrove
We also need to give credit and thanks to external exhibitors and performers not affiliated to our Sunday Schools. Dept of Water and Waste – City of Cape Town, Gottlieb Arendse and Jason Mingo – SASS, Dept of Water Affairs, who unfortunately could not display any live goggas or frogs due to the rivers being dry. The Kensingtion Girls Chorale Choir for their flash mob and the outstanding performance on stage, conducted by Lizl Gaffley and accompanied by Thurloe Erntzen on the keyboard. Thanks as well for all the support we received from parents, family and friends especially those who manned the food stations and managed the face painting and craft stalls. 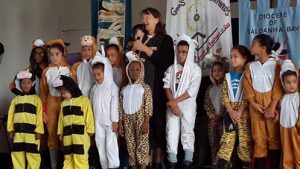