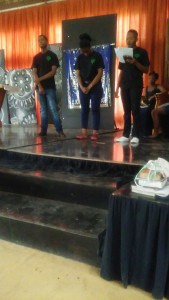 The Diocese of Johannesburg St Mary and St Agnes Guild hosted their annual Conference from the 27th-29th November 2015. The conference was held at St Barnabas College in Bosmont.

The Green Anglicans office based in the diocese of Johannesburg attended the conference honouring the invitation to come and give them what they call “The Green Talk”.

When the session began I elaborated more on the importance of our relationship with God and the creation as human beings. I quoted Genesis 1:26-28 where God tells us the he Created man and women in his own image and gave them dominion over all the earth. This included all the animals that God had created as well as the entire earth and all that belonged to it. I further mentioned that even after the curse, God never withdrew this responsibility. We must care for the world that God has given to us.

The session became more interesting for them as they came to understand why it was so important for us as a people of faith to care for the creation.

As we engaged further they asked on what sort of environmental activities they could do as a Guild. The following was suggested

I ended by saying, to care for the creation, as commanded, is obedience to God and that as believers we should and will show good stewardship by accepting the responsibility that was given in the beginning.

They vouched that as a guild they will be environmental friendly as some of them had little or no understanding on why it is important to care for the earth. They also promised to invited the green Anglicans office to help them in the environmental activities they will engage in.

The session ended with songs from Ryan the rhino with the St Agnes girls.