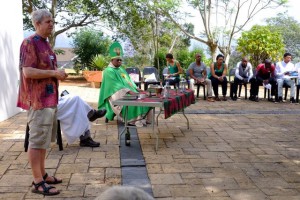 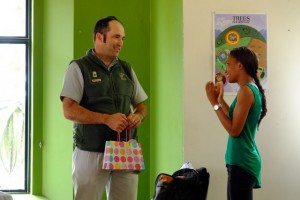 The Diocese of Natal’s annual environment workshop which takes place during the first week of November took place on 7 November.  A few bursaries were grantedfor some people travelling from Pietermaritzburg to stay overnight the night before.  This group of seven were accompanied by Sibu and Michelle (environment interns). The workshop officially started on Saturday morning with registration and a short meet and greets session were everyone introduced themselves. 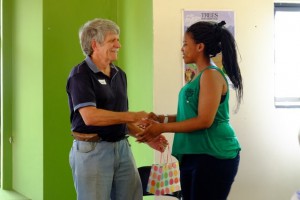 Thereafter our 1st guest speaker John Parkin from Durban Solid Waste (DSW) who informed us about landfill gases and how they have managed to successfully turn the Mariannhill landfill site into a conservative area  which generates usable gases from our general waste.  He stressed the need to separate or organic waste from recyclable goods for easy decompositions purposes.

He was followed by Brent Coverdale from the KZN Ezemvelo Wildlife who gave us an insight into the importance of bio-diversity with “what’s all the fuss about?” He said that much of our natural heritage is venerable.  He stressed that it is not just the Big 5 is that are importance species in South Africa – we should also be concerned about, for example, our nation bird,  the Blue Crain,  which is found mainly in KZN.  He said that the depletion of our natural resources and wildlands are linked to the “golden arrow”. A short video from the Story of Stuff explained this golden arrow concept, which is essentially the problem of consumerism. Brent ended off with a few words of encouragement on how we as earthkeepers should be taking care of our bio-diversity; we should consider joining community groups or clubs to broaden our understanding of the concept of bio-diversity so as best enabling us to contribute to sustaining our wildlife.

The interns took a different approach during their session – they focused on “mobilizing the church”.  The purpose of their presentation was to look at a personal journey of our spiritual connection with nature: looking at what interests us in becoming passionate about the environment.  Some are concerned about water conservation whilst others are interested in energy usage; others on waste management and climate change. With whatever interest you have how are you going to go about doing it for yourself with no expectation of reward at the end of it?  How you going to improve on it; telling your neighbor about it and eventually how can you invite the church in joining you in what you are doing?

In the final talk which was led by Revd Andrew Manning on the Golden Calf of Consumerism, he presented to us how we as Christians have become part of turning the consumer world into an ideology and how the world has used our Holy Days for marketing purposes to “buy” as part of celebrating on these festivities. He also reminded us that we are not of this world and therefore we shouldn’t be living according to this world.  His talk encouraged us to change our mind set when it comes to consumerism that we need to think what we actually need rather than what the world wants as to need.

Guys Caws equipped us with a book on environmental stories. He read a story from the book and said it could be used with Sunday schools in educating them in a creative way. The copies were made available to the group to take home and use.

Information was given on the upcoming Conference of the Parties (COP 21) meeting in Paris (30 November – 11 December).   Details of the Durban Global Climate March were given.  Reports of the recent Midlands anti-fracking actions were also shared.  The recent Papal Encyclical, Laudato Si’, was also mentioned but there was no time to discuss it on any depth.

Overall the workshop was once again a success; we would like to thank our guest speakers for availing themselves and being part of the workshop, the information that we have gathered from them was much appreciated and well set. Special thanks to the Vuleka Center at Botha’s Hill for hosting the workshop and the outstanding service they gave us.   Everyone’s input was greatly appreciated. And lastly we would like to thank the team that organized the event, including Andrew Warmback, Guy Caws, Rob Brien and Andrew Manning, for their effort and commitment.