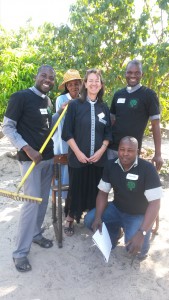 The Namibian Diocesan Environmental Conference took place at convent of the Holy Family at Onekwaya, about as far to the north of Namibia as you can get!

We were greeted by the warm and hospitable Sister Gertrude who hails from Lesotho. The north of Namibia is in the grip of one of the worst recorded droughts. Families are struggling as their crops have failed and the government has encouraged people to slaughter their precious cows rather than let them starve to death. This has then flooded the market and dropped the price of beef. People wept as they came home with the tiny amount they were paid for a precious head of cattle.

Although the numbers were small they were enthusiastic –with members from nine churches and four of the seven archdeaconries present.

Rev Rachel Mash, provincial Environmental Coordinator shared the gospel call to respond to environmental challenges and climate change. Emmanuel Nakambale, a teacher gave us some statistics on global warming as well as practical hints on how to reduce our footprint. Rev Joseph shared ways to deal with solid waste.

We had a wonderful practical session on farming led by Fr Lasarus, a passionate farmer who took us on a visit to the sisters vegetable garden. What a beautiful sea of green amongst the sandy desert!! They gave us vision and hope about what can be done.

Namibia is faced with multiple challenges, deforestation, loss of biodiversity, drought and climate change. Litter blows in the wind and the children play amongst broken glass.

And then the conference broke into groups to discuss how they would respond to the challenges. In response to deforestation they agreed to call on confirmation candidates to plant a tree. They also want to take up recycling and see how it can be used to raise funds for church use.  Littering will be challenged as it is not caring for Gods sacred earth.

The local archdeaconry committed itself to organizing an environmental conference… watch this space!!

The Sunday saw a packed congregation at St Mary’s Odibo , reported to be the largest church in the Diocese! Rev Mash preached about the sacredness of God’s creation and how we often forget the first commandment – to care for Gods Earth (Gen 2:15).  She gave an example which the congregation will not forget when she dumped a plastic bag of rubbish from the pulpit! We care when our holy church is filled with rubbish, yet we do not care when God’s sacred Earth is filled with junk!  The children watched with wide eyes!!

St Mary’s Odibo was also home to the famous artist John Mafuangejo, who studied there and several of his beautiful prints are on display at the archives run by Nancy Robson. 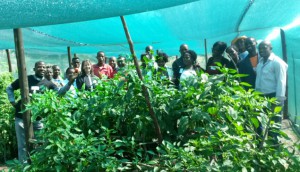