One thousand five hundred people gathered for the biannual Anglicans Ablaze in Cape Town. It was a wonderful chance for people from different Dioceses to discuss the fifth mark of mission – to care for creation.

A Green Anglicans networking picnic was held the day before the official conference began. Tree-planting, water conservation, food gardens, urban-greening and cleaning, recycling and solar power are some of the exciting eco projects that were shared).

The picnic was held at Kirstenbosch National Botanical Garden on 4 October 2016 (St Francis Day), and included a tour of one of the most beautiful gardens in the world. Being out in nature, and praying and worshipping together outside, is one of the best ways to build a care for creation movement in your parish or diocese.

Delegates shared their involvement in various green initiatives all over Southern Africa.  Saldanha Bay  Diocese  was applauded for becoming paperless in all its chapter meetings after securing a donation of tablets.

The delegates were part of over 70 people who attended the Care for Creation workshop held on 7 October as part of Anglicans Ablaze. Rev  Rachel Mash spoke on why Creation is a foundation of our faith. Co-presenter Ncumisa Magadla facilitated talks by representatives from various parishes and dioceses who explained to the inquisitive group how their innovative projects not only create awareness and save energy, but are fun, deepen our relationship with our Creator, and save money too.

Lessons learned include the importance of building on a foundation of eco-spirituality, starting small in your parish with one or two projects, and then getting involved in advocacy and community issues.

The delegates were pleased to hear the provincial synod in September announced it would:

It is part of our faith to do what we can to care for creation. 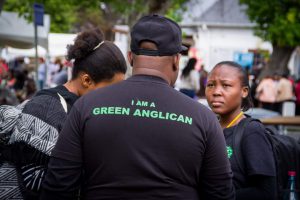 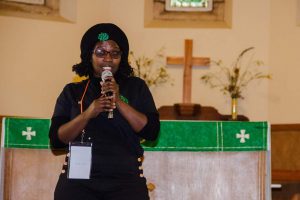