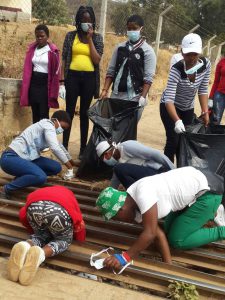 The young and children’s division of the Women’s Mission Society of the African Methodist Episcopal Church: Young People’s Division (YDP) held its annual conference in Manzini (Labotsibeni AME church) on the 16 of August 2017. The YDP has the environment as one of the priorities on their constitution and annual plan of action. The leadership noticed that over the years environmental issues were addressed without or less meaning for most of its members. Noting the vibrancy of the Green Anglicans in Swaziland; Mncedisi Masuku was invited to do a presentation on the importance of being stewards of creation as a church before the youth go for a clean-up campaign.

Mncedisi in the company of Ndumiso Malindzisa emphasised on the first call for humans by God to care for creation (Gen 2.15) and how human activities has affected the globe of life. He encouraged young people to live green at home, school, and work and in their daily life. He encouraged them to participate in season of Creation and other environmental important days. The YPD has been invited to join the Green LUSHE (ANGLICAN and Lutheran Church) movement. LUSHE is a combination of Luthela and Esheshi which are Swazi names for the Anglican and Lutheran churches. The AME church is known as KUSH in Swaziland. Sihle Motsa the YDP president jokingly said we shall now be KULUSHE Green Movement and she promised to mobilise her church youth to participate in the Season of Creation service organised by LUSHE.