On Friday the 11th December Green Anglicans presented to the youth in the Diocese of Lesotho. The youth conference was held at an Anglican school St Michaels and All Angels in Maputsoe, Leribe.  300 young people from the age of 7 and upwards attended the conference.  the team explained to the young people what it means to be a green Anglican.

The young people were asked on what it means to be green. Volunteers was asked to come up and say what they thought it meant  to be green. The young people were quite clued up on how to be green. They knew how to recycle in their homes and what could be composted in their gardens.  They also knew recycling is important and learning not to waste food or anything that could be used more than once should be kept. It was also said although their country does have water, it is not good to waste it.

The youth was really excited and welcoming to us, they were in high energy and spirit as they sang for the green team at the start and end of the presentation. Presenting to such a big crowd was overwhelming but yet humbling. The young people were excited to meet  Anglicans out in the world not only in Lesotho. They were also inspired to part of the Green Anglican movement. 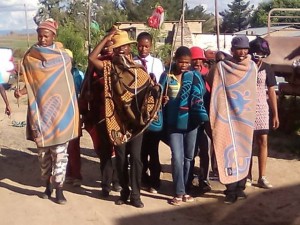