St Francis Church in Ravensmead had a ten week programme with their Sunday School, celebrating the Season of Creation. This culminated in a joyous celebration, ‘confirmed’ by a beautiful rainbow on a dreary Sunday morning – symbolic of God’s covenant with Noah. For ten weeks we have been teaching  the young about God’s creation and where we, as humans fit into His web of life. During the one-day training session, given by Revd Rachel Mash, the activities seemed easy, with little resources needed. In reality, it was at times overwhelming and stressful to put something of quality together with very few resources.

The highlight of this program was Ryan the Rhino – something visible and tangible for the children to refer to during the sessions. Sharing what we had learnt with the congregation before the patronal festival, gave us an opportunity to showcase what we have learnt, but also enforced the importance of involving everybody to look after God’s creation – God’s creation, which not only include humans!

To conclude this program – and very fitting to our parish – the grand finale, led by our very own Sunday School children was showcased at the patronal festival, where we celebrated the life of our patron Saint, Francis of Assissi.  The festivities started the Saturday already where a plant/vegetable competition was held where everybody brought their plants and vegetables they attempted to grow in their gardens. The congregants including the Sunday School children donated vegetables in thanksgiving to God for all His blessings upon us and the church was then decorated with these.

Promises were made by the children and adults during the service to follow in St Francis of Assisi’s footsteps by preserving life on earth. The participation of those involved made the service a success, but also the congregants dressed in green to symbolise life and their commitment to ‘doing’ something about the current state of degradation and loss of biodiversity. We said goodbye to Ryan, he will sleep in our hearts, but will hopefully be visible in our actions. Where the promises made at the patronal festival will not only stay written on a piece of paper, but will be put to life in what we do! 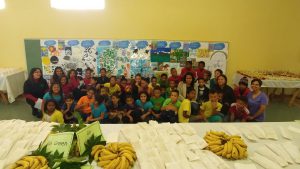