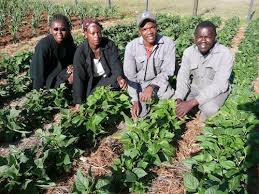 Anglicans from Uganda, Kenya and South Africa took part in an Interfaith workshop “The International  on Faith- based Farming and Sustainable Land Management” in  Mukono , Uganda. Close to 100 religious leaders from nine African countries gathered to discuss the crisis of food security and how faith communities can respond.

It was fitting that the gathering took place in Uganda, which faces severe environmental degradation leading to food insecurity. God  blessed  Uganda, known as the  ‘Pearl of Africa’  with fertile soil, regular rain twice a year   and the waters of Lake Victoria teeming with fish. And God said ‘It is good’. But sadly humans have not cared for this garden they were given and now Uganda faces severe environmental challenges. At independence in 1962 the population was 5 million , and over the last 50 years it has swollen to  35 million.  As the population grows so land is reducing – an area with 30 land titles in the 1960s may now have as many as 10,000 land titles. The forests are being chopped down at an alarming rate – each year an estimated 92000 hectares are lost.  The teeming waters of Lake Victoria are being polluted and many fishing companies do not consider the fish safe to eat. The famous tilapia fish which used to be caught the size of your forearm is now often not much larger than your hand.  The land is being denuded and subsistence farmers who make up 90% of the agriculture , are facing dropping yields. 30% of the country is now classified as ‘severely degraded”. Farmers are moving increasingly into marginal lands such as mountain slopes and wetlands. These environmental challenges are being severely worsened by climate change , as the once regular rainfalls have become insecure, leading to heavy floods and periods of drought.

So how can the church respond to the challenges in Uganda and other parts of Africa? Anglicans took part in the interfaith workshop organized by the Alliance of Religions and Conservation, taking place in Mukono, Uganda.  The workshop focussed on conservation strategies such as “God’s way of farming’ which promotes a low tillage natural fertilizer method. Africa needs to double its food production to meet population demands by 2050. Farmers are being tempted by GM (genetically modified) seeds which promise miraculous increases in yield, but tie you in to purchasing seeds from multi-nationals rather than using indigenous seeds.  The problem is not the seeds – the problem is the land. Overgrazing, chopping down of forests, use of pesticides, all of these methods have destroyed the life of the soil and led to reduced yields. Conservation farming is seen as one of the best ways for smallholder farmers to improve their yields significantly and to reduce dependency on expensive externals such as fertilizer and  pesticides.

All the religious leaders, with two abstentions agreed to reject a proliferation of Genetically Modified Seeds in Africa on World Food Day.

Rev Dr Rachel Mash is the Environmental Coordinator of the Anglican Church of Southern Africa, attending the “ International Workshop  on Faith- based Farming and Sustainable Land Management” in  Mukono , Uganda