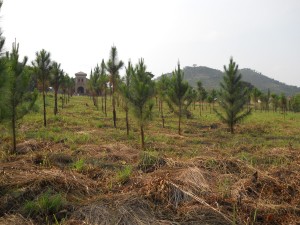 Uganda – the Pearl of Africa  – is home to some of the most beautiful forests in Africa. Uganda was blessed with a near perfect climate , rains twice yearly. However due to population growth, the forests are being destroyed at alarming rates. Many areas that were densely forested have become denuded. One such area is the Diocese of  Bunyoro Kitara in Uganda in near to the border with the Democratic Republic of Congo.

Bishop Nathan Kyamanywa, known as the “Bishop of the Trees”  had the vision of reforesting his Diocese and set up a programme with the support of the Alliance for Religions and Conservation.  The Mothers Union have taken up the dream of  a green Diocese.

MU members were trained by foresters to plant the seeds, do the potting, and care for seedlings. They also learned entrepreneur skills. Once the beds have been prepared, the women are given seeds, either hard wood such as mahogany, or fast growers such as eucalyptus or pine.

Since the project started 18 months ago, they have managed to plant 35000 trees and another 35000 seedlings are being grown.

In the Diocese, when a child is baptized or confirmed the family must plant a tree as a symbol of their spiritual growth and care for God’s creation.

“This project is very nice because our area was formally a forested area, but it has become deforested. I get so encouraged when I see people planting a forest again! It makes the Mother Union proud to know that their organization is making a difference” Rev Kavuya Joram

Rev Kavuya Joram is  attending the international workshop on Faith- based farming and sustainable land mananagement in  Mukono , Uganda. 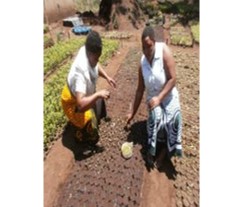