The announcement  from the UN’s panel on Climate Change is apocalyptic –  irreversible climate changes are a possibility unless we act very quickly. Millions of the most vulnerable of the  peoples of our Earth will be affected by devastating  drought, flooding and  sea level rise .

Some Christians who believe that we do not need to act-  for the Bible tells us “ I see a new heaven and a new Earth , for the first heaven and the first Earth had passed away” (Rev 21:1) Salvation is an escape to a new earth, it is not our role to get involved in saving the Earth.

However, this is not what the Bible teaches – In Greek there are two words for new – “neos” and “Kainos”. Neos  means brand new – throw away the old and bring out the new. Kainos – means renewed, restored to a better state than before. This is what the  bible tells us – “ I see a new heaven and a (kainos) renewed Earth” (Rev 21:1). There is no Planet B – we are called to renew this one.

So we as Christians are called the renew the earth. The very first commandment that we were given as human beings was to care for the Earth (Gen 2:15) – “work the Earth and look after it”

So how can we do this?- The IPCC indicates that we need to  cut greenhouse emissions by 50 percent by 2030 and eliminate them by 2050.

It is time for us as Christians to take action

The Bible tells us that Creation is groaning as in child birth. (Rom 8:22) This is a very positive image – the Earth is in serious pain at the moment but we are in the process of ‘birthing’ a better future- with clean energy, clear rivers and fresh air for our children and grandchildren.

We also know that Creation is standing on tiptoe waiting for the sons and daughters of God to be revealed (Rom 8:19) – it is time for us to act.

As Churches of Southern and Central Africa we are committed to the following:

The Archbishops also are committing to personal lifestyle changes to reduce their carbon footprint:

Most Revd Dr Thabo Magkoba, Anglican Archbishop of Capetowna and Primate of the  Anglican Church of Southern Africa

I pledge to use more gas at home than electricity, to tree planting after major travelling and to continue abstaining from eating meat.

Most Reverend Albert  Chama, Archbishop of Anglican Church of the Province  of Central Africa

“ I pledge where possible to eat locally grown food , to plant as many trees as possible and to reduce my use of energy as much as possible”

Most Reverend Stephen Brislin, Archbishop of the Catholic Archdiocese of Cape Town.

I pledge to using aircon and heating less, to only use my car when absolutely necessary and to continue to reduce, recycle and re-use. And, of course, I will plant trees whenever possible. 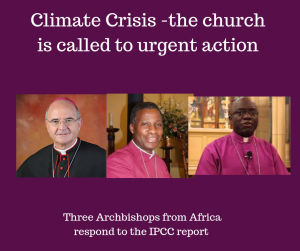 2 thoughts on “Three Archbishops from Africa respond to IPCC report”