THE EPISCOPAL DIOCESE OF WASHINGTON EMBRACES SEASON OF CREATION

At their Diocesan Synod, the following resolution was passed

Resolved, that the people of the Diocese of Washington, being disciples of Jesus Christ and persons of faith and conscience, taking seriously the biblical mandate to care for God’s creation, encourage individuals, parishes, schools, and other church-related organizations:

This resolution is intended to encourage individuals, parishes, schools, and other church-related organizations within the Diocese of Washington to recognize in their worship and prayer and by example, the biblical mandate to care for God’s creation.

communities of faith, The Episcopal Church” needs to be “an example by making intentional decisions about living lightly and gently on God’s good earth;” and in an earlier June 1, 2017, statement, Presiding Bishop Michael Curry called on the Episcopal Church to take bold action to address the climate crisis, reminding us that we are all trustees and stewards of God’s good creation.

In recognition of the Biblical mandate to be stewards of God’s good creation, the Archbishop of Canterbury Justin Welby and the Anglican Communion Environmental Network encourage participation by all within the Worldwide Anglican Communion in the Season of Creation, the period each year from 1 September (the Global Day of Prayer for the Care of Creation) to 4 October (St Francis of Assisi Day) to pray and celebrate with creation, focus on the story of the Earth, and commit to a ministry of healing the Earth. The Season of Creation was first adopted in 1989 by the Greek Orthodox Church and the concept has now spread to other denominations.

Among other resources for celebrating the Season of Creation are worship liturgies and Sunday school lesson plans prepared by the Anglican Church of Southern Africa and the Anglican Communion Environmental Network. See https://www.greenanglicans.org/resources; and https://acen.anglicancommunion.org/resources/season-of-creation.aspx.

During a recent visit to Washington, the Rt. Rev. Ellinah Wamukoya, the Bishop of Swaziland and Chair of the Anglican Communion Environmental Network, and the Rev. Dr. Rachel Mash, the Provincial Canon for the Environment for the Anglican Church of Southern Africa, recounted the many environmental hardships Southern Africa has been suffering. They described how these hardships have led to the formation of an ecumenical and interfaith movement in Southern Africa to foster a clean environment. The youth in Southern Africa have been particularly active in responding to the need for a healthy Earth. In view of our environmentally interdependent world, Bishop Ellinah and Canon Mash encouraged the Diocese of Washington to recognize creation care as a priority and, as Archbishop Emeritus Desmond Tutu has said, “to love the Earth as much as God does.”

Accordingly, it is appropriate for the Diocese of Washington to celebrate in our worship and prayer and by example, the care of God’s creation by adopting the foregoing Resolution for Creation Care. By so loving God’s creation, we believe that our individual and group activities and choices will increase the preservation and renewal of this fragile earth, our island home.

This resolution will not impose any costs on the Diocesan budget. 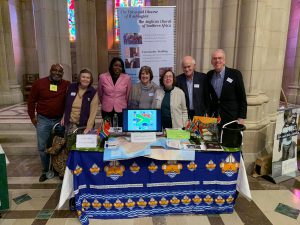