DIVEST FROM FOSSIL FUELS! 5 trillion dollars have already been Committed!

Yesterday the Divest-Invest Campaign released its figures. The campaign to take money out of fossil fuels and to invest it differently began only five years ago with a handful of students  and already the value of assets has reached $5.2 trillion!

Worldwide 688 organisations and over 58000 individuals have committed to divesting their money from fossil fuels. The largest groups represented are the faith based sector (23%) and philanthropic foundations (23%) The pledges have come from 76 countries in all parts of the globe.

Why is divestment important?

The burning of fossil fuels is leading to climate change which will increase  poverty and hunger. We are on the cusp of a transition to green energy and divestment is a practical action that Churches can take to encourage this transition to take place more quickly

Archbishop Tutu has called climate change the human rights issue of our day. He calls on churches and other organisations to:

You can watch his video :http://divestinvest.org/individual/desmond-tutu-on-climate-change/

The Anglican Church of Southern Africa took the decision to move its money “out of the problem”  at its latest Synod. The challenge in South Africa is that there are currently no fossil fuel free portfolios, so ACSA will be working with other organisations such as the Desmond and Leah Tutu Foundation, Fossil Free South Africa and Universities to put pressure on financial institutions to create such portfolios.

You can see the list of Churches who have committed to the divestment process on :

Church of England (divest from thermal coal and tar sands) 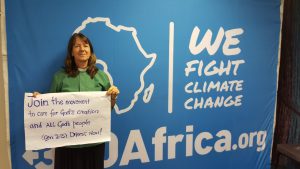