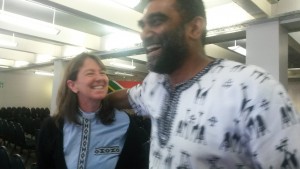 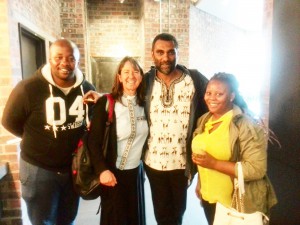 Dr Kumi Naidoo addressed faith leaders and interested citizens at a workshop in Cape Town on the topic : preparing ourselves for the 22nd Century

“We must come to terms with the inconvenient truth that without the Faith community we will not be able to avert catastrophic climate change. The numbers of people that we need to be  standing up and making an appeal to our governments will not come from NGOs, trade unions or student movements, only the faith communities can mobilise so many.

There is a lot of burden on the shoulders of religious shoulders.

There is enough environmental wisdom in every religious text that we have.  The silence of religious leaders has been deafening in terms of standing up for what God created. He didn’t only create human beings, God made the whole world. Over all religious leaders have failed us they must read their scriptures again and fulfil the promise and obligation”

He posed the question – “have you become well adjusted  to injustice?

A WWF report indicates that “if we were to deliver the same quality of life that folk in developed and elites of developing enjoy “ we would need five planets.

As we plan for the 22nd Century – we need to ask ourselves “ what is an equitable distribution of wealth?” We have become  maladjusted to patterns of consumption that do not add quality to life.

The women’s movement gave us an important word “intersectionality” you cannot advance gender justice without understanding class, religion etc. We need to break the divide between “red” and “green” movements, between labour movements and environment movements If you care about the environment you must also care about jobs. Ensuring the transition to a new green economy must take into account that it is within our grasp. Those who are holding us back are those who are unjustly benefitting from profit making at the top end of the fossil fuel industry. When there are profits they are privatized, when there are mess-ups – they are socialized. Nuclear is too expensive, too dangerous and too little, too late” The nuclear deal is an distraction from where we need to be going. No one will get exclusive licenses for the wind or the sun. Renewable energy is more decentralized.

We either win on environment and poverty or we lose on both. Climate change is hitting us now and big time. The tragedy for Africa is that even though we are facing the worst impact of climate change , the world does not see it. Why??

The Philippines or New York disasters were huge cataclysmic media moments. The main impact of climate change in Africa is desertification and drought , a slow burning accumulative process. We need to make the link with the refugee crisis.

What is the good news? As environmentalists we want to save the planet , but  “the planet does not need saving. The planet will warm to a point but when humans are gone, the planet will still be here – bruised and battered,  without us, the forests will grow again, the oceans will recover. The planet does not need saving. The challenge is this – can humanity coexist with the  planet for centuries and centuries to come? Can we  save the future for our children’s children.

Preparing for the next century is going to take boldness, and we need to reclaim our democracy. We are in this for the long haul – it is more than being willing to give your life for the cause – we need to be willing to give the rest of our life. This is a marathon, not a sprint.

A position of neutrality, to sit on the sidelines is a choice to be part of the problem.

When our grandchildren look at us in the eye and say what did you do when the science was clear, what will you feel?