PENINSULA PADDLE – TAKING BACK THE WATERWAYS

“The health of a City is seen in its waterways” – Kevin Winter, a member of Christ Church Kenilworth in Cape Town has a passion for water. He works at the Future Water Institute at the University of Cape Town and given the current drought crisis , has been invited to address the issue of water justice at the International Water Justice Conference as well as the AGM of A Rocha South Africa.

As he often says, the challenge is not just the scarcity of water but also the quality of water. The City is connected by its waterways, which are often polluted by domestic and industrial waste.

How can we help build awareness of the real state of our city’s waterways? And so the idea of the Peninsular Paddle was born, to get people onto kayaks and to explore the rivers, to see and experience for themselves the beauty of the rivers as well as the pollution. The Peninsular Paddle has two goals – to raise awareness about the blue-green water corridors that have potential to join our divided city; and to bring to the attention of the City of Cape Town and public the condition of the waterways. The third goal is to have fun on the water!

This year was a great experience, young people came in their numbers as well as the young at heart. Although it was a cold and windy day, we kept warm by paddling and it was fascinating to see the different parts of Cape Town from a different perspective.

There was a huge variety of birdlife, which was heartening to see, but also sad to see how much litter, especially plastic, was on the banks of the rivers and to pass pipes leaking unpleasant things into the river.

We were all inspired to make a difference, to treasure our waterways and inspire others to do the same.

There are not sacred and profane places. There are only sacred and desecrated places—and it is we alone who desecrate them by our blindness and lack of reverence. It is one sacred universe, and we are all a part of it. (Richard Rohr)

Over 80 paddlers joined the Peninsula Paddle last Sunday to celebrate the recent rainfall and refreshment that this brought to the dire state of Cape Town’s waterways.

The Peninsula Paddle is a gruelling journey from Muizenberg to Milnerton that requires participants to paddle and drag their kayaks through canals, rivers and vleis over a distance of about 15 kilometres. Certain sections are not possible to traverse.

Along the way the paddlers get a close-up view of the city’s waterways following months of accumulated litter, aquatic weeds and contaminated water that regularly flows into the canals and lakes.

The paddle is a long standing initiative of community-based conservation organisations, with the leading role being played by UCT’s Future Water Institute and the Friends of the Liesbeek.

Greg Bertish was the celebrity guest at the event this year. He is an inspiring adventurer and fundraiser for the Children’s Hospital Trust. He paddled and sailed his dinghy through the waterways – a sign of his personal grit and determination.

The paddlers were also joined by 30 youngsters from the Steenberg and Grassy Park communities, which lie adjacent to the paddle route. Every one of these participants had to prove their ability on the water by attending a series of practice outings held at Zandvlei, which were organised by the City’s Sports and Recreation Development Department. The programme encourages the youth to take an interest in waterways and enjoy the fun of paddling these river corridors.

The Peninsula Paddle raises a critical message: “The health of the city is seen in its waterways.”

The blue and green waterways are the veins of the city that connect well-established suburbs to some of the poorest parts of the city. We all share the waterways. Whatever gets dumped into storm-water drains and is allowed to flow into the waterways will eventually find its way to the sea.

The recent rains flushed tons of trash, plastics and other materials out to sea. Once solid waste gets into the water, it is almost impossible to get it out. The challenge of addressing the pollution of Cape Town’s waterways and beaches is overwhelming the City’s resources. Regular cleaning and maintenance is necessary, but this is unsustainable in the long term. 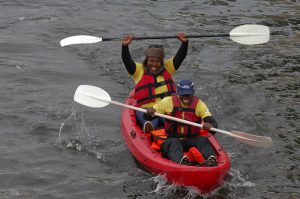 The heart of the challenge is about enabling citizens to enjoy and value these waterways – this is the long term vision of the Peninsula Paddle.