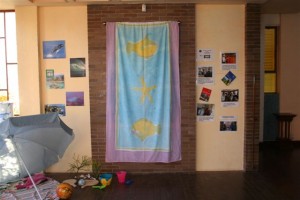 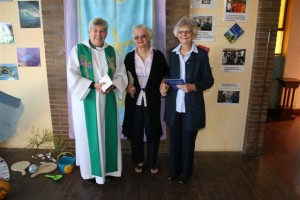 We celebrated Ocean Sunday for the first Sunday of Season of Creation. Our suburb is in the sea port of Durban : many homes have distant views of the sea, some people have jobs relating to the harbour and we know the joy of visits to the beach and swimming in the sea. We celebrated the mystery and wonder of oceans in a number of ways in addition to the liturgy. We also considered the very real need to care for and protect our oceans and life in the oceans. At the start of our sermon from Job 38:1-18, we had a recording of seagulls and waves!. In our Prayers of the People, as well as prayers for the oceans and environment, we had prayers for seafarers, important as we live in a sea port. In addition to our worship, we had a beautiful floral arrangement which cleverly made us feel that we were under the water. Our secretary included a sea scene and sea creatures in our Pew Bulletin. A display at the entrance to the Church included sea pictures, posters from the Mission to Seafarers and a beach scene with shells, swimming gear and beach toys. A separate display focussed on the problems relating to litter and pollution. Stella Cottrell, Diocese of Natal