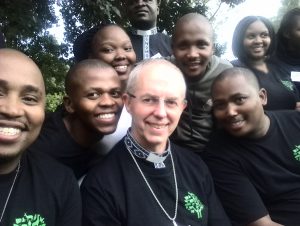 The Anglican Church of Southern Africa’s Environmental Network (Green Anglicans) together with the Anglican Province of Central Africa, will hosted 75 young participants on a week-long conference in Zambia. Beginning the 4th of April to the 11th of April 2016, the conference was held at the Pastoral Centre of the Archdiocese of Lusaka.

Participants were chosen by their diocese as movers and shakers on care for creation, to learn on how to grow environmental ministry further in their regions. Dioceses represented included: Angola, Free State, Highveld, Johannesburg, Lebombo, Lesotho, Namibia, Natal, Niassa, Pretoria, Saldanah Bay, Swaziland.

The conference equipped young people across the Anglican Church in Southern Africa, with methods of advocacy, behavioural changes, research and design thinking. All of this will assist the young people in building a care for creation movement back in their dioceses.  Working with the Green Anglicans Provincial team and diocesan coordinators, they also created a plan that will work for their regions as they from different parts of the province which are affected differently by climate change.

Among the people who attended the youth conference was the Archbishop of Central Africa Albert Chama, and the Bishop of Zambia William Mchombo.

In one of the sessions the young people presented to the Archbishop of Canterbury (ABC) Justin Welby, and he later addressed them and encouraged them to be servants of God and serve the world.  Responding to questions by the youth the ABC said to the young people they are the church of today and leaders of tomorrow and tomorrow may not be far.  This motivated young  people as they were about to engage in their plan of action for their various parts of Southern Africa to remember that they will be in leadership and need to implement these actions, and so influence the rest of the community.