Around the world Scientists are assessing the impact of Climate Change and helping us to understand what we need to do to mitigate (reduce the impact) and to adapt(build up resilience to the impact). Their work is very important an culminates every five years in the IPCC Assessment report of the United Nations Intergovernmental Panel on Climate Change (IPCC). The last report was the AR 5 (Fifth Assessment report). https://www.ipcc.ch/report/ar5/ which was produced in 2014, and was based on the work of over 8000 scientists. They only look at peer reviewed articles (articles published in journals which have been reviewed by other experts in the field.

Scientists are now working on the sixth Assessment report (AR6)  which will be published 2023 in time or the first global stocktake  by the UNFCCC under the Paris Agreement.

When one looks at the scientific articles being produced , the role of faith is not very often considered, even though faith can play a large role in behaviour change (mitigation) and faith communities are very strong in the countries most vulnerable to climate change , so can play an important role in adaptation.

Last week a large international conference on Adaptation – Adaptation Futures 2018 took place in Cape Town, South Africa. The Green Anglicans had a session on “Faith Based Organisations and Adaptation to Climate Change” looking at the role of Faith Communities generally and the work of the Anglican Church in Southern Africa , with a case study in Swaziland.

One of the contributions to the debate, was indeed holding the conference on African soil , where faith communities are very strong. Often NPOs are based in Europe where the role of religion is weaker. At the final plenary they presented the innovations from the conference that would be taken forward for further study and one of them was:

This means that this very important subject will be studied further and end up in the final IPCC report.

The winning poster at the event was granted to  Julia Davies of the Adaptation at Scale in Semi-Arid Regions (ASSAR). Her poster was based on an upcoming publication, which looks at the role played by tradition and religion in the variable levels of uptake of climate smart agricultural practices among some farmers in the semi-arid, north-central region of Namibia. The research argues that, because traditional norms and religious beliefs play such a pivotal role in agricultural decision making for some Namibian farmers, these value systems should be seen as a key platform through which to promote the dissemination and uptake of climate change information in general, and Climate Smart Agriculture  in particular. “Organisations such as the Green Anglicans, which aims to fulfil God’s call to be Earthkeepers and to care for creation, can play a key role in this regard,” explains Davies. Positioning religious and traditional leaders as climate change ‘champions’, changing the framing of climate change to appeal to cultural values and integrating science with traditional knowledge are all ways in which to bring climate change into religious and traditional narratives. The research will be published later this year in a book entitled ‘The CSA Papers: Investigating the Business of a Productive, Resilient and Low Emission Future’ 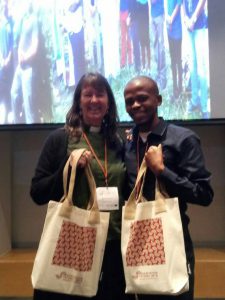