The Anglican youth of Hlathikhulu Parish in the Diocese of Swaziland had a Green Valentine weekend. They arrived Friday 12, 2016 at St Mary’s where they held a sleep over conference. Friday they only had an evening song and went to bed in preparation for the next day.

Saturday was the busiest day as they firstly had Morning Prayer in the church’s backyard vegetable garden. “It was a refreshing experience to enjoy the presence of God outdoor in the beauty of nature looking on the planted vegetables. For most of us was the first time experience and we wished we could do it more frequently.” Mcedisi Masuku 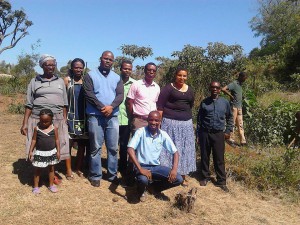 Moving with the programme we the first session facilitated by Mcedisi. Masuku which was, Climate Change and Eco-Justice. He made a simple explanation of how green house gases emitted by human activities have lead to climate change and how it has affected world temperatures and rainfall distribution. He then gave some effects of Climate Change in food production in Africa and how the future is projected to be if no actions are taken. This presentation was an eye opening as it has provoked questions and discussions that even tried to address the role the youth and the church at large can play in influencing the justice system of the country especially on the subject matter. Swaziland Environment Authority (SEA) delegates were part of the discussion and gave the youth an assurance that they are ready to listen to their issues on environmental affairs.

Thereafter, SEA took the stage and made a presentation on their role as an organisation on environmental issues in the country. Areas of interest for the youth were the education and project implementation part. The organisation also promotes Eco-clubs in schools and the Anglican Church has numerous Schools in the country and the youth made it to be next action after the Conference to implement Eco-Clubs in Anglican Schools. The Parish sealed its relationship with SEA as a symbol that they will work or journey together on environmental issues by planting an Avocado tree which will be a permanent symbol and reminder for their commitment to be Earth Keepers. This tree will also be a source of shade for the church and shelter for other animals, food and plays a role in reducing Carbon foot print in the environment.

After Lunch, the discussions and presentations were sealed by Rev. M. Simelane who made a presentation, “The theological aspect of the Environment” A lot was discussed but to mention a few he stated that the church or people have developed at a very fast rate such that they are far ahead of God whereas God is still in the beginning where he said it is good. If the church is to deal with environmental issues, it has to go back to the beginning where God is. It was said that God loves nature in a way that where he ever revealed himself it was through nature (Moses and burning bush, the dove when Christ was baptised e.t.c) and even God the Son is at times described through nature (root of David, rock of ages, Lion of Judah e.t.c). In discussion it was stated that God is not happy if nature is not taken care of and is a sin in his sight. It is the duty of the church to take care of nature and to question the state when it is not doing well as much as the state has the duty to question the church.

After this presentation the youth went for shopping in town and informally were picking up litter along the streets making awareness that Hlathikhulu should be kept clean. Coming back from Shopping on the programme was land scapping. The youth felt the need to keep their church looking good thus they planted flowers around the church.  In moving forward on their review for the conference, they stated that they need another workshop that will involve different stakeholders including government representatives.

Sunday was declared as the day of Love for Creation where the whole church was involved in the service. Swaziland is currently faced with drought which has lead to serious water shortages. The focus of the service was on water as the readings of the day, sermon and prayers focused on water. Season of Creation was used to get readings and prayers. The readings were:

Psalms 104:10-17 (recognition of the relationship between water and life and God as the provider)

Revelation22:1-7 (water as a metaphor for the life that flows from God)
John 4.1-15 (the spiritual meaning of water)

St. Michaels and UNISWA Anglican Chapels held the same on Sunday and had their own trees to plant. Manzini Parish is yet to plant their own tree.

We are grateful to the Wilson Family of St. Antony’s, Anglican Youth Guild and Diocesan office for assisting the Parish with resources to run this conference and SEA for availing themselves in our conference. A special thank you to Rt. Rev. E.N Wamukoya who sponsored the trees and flowers, what a green Bishop. We are looking forward in our next workshop and activities to implement as we are a green Parish.