As it is written in Psalm 24:1 that “The Earth is the Lord’s, and all living in it! This report reflects on the mini-eco conference hosted and held by the Diocese of Botswana youth at St. Augustine’s Serowe on the 8-10 June 2018.

Young people from all over the diocese of Botswana gathered together at Serowe for the conference for the love of God, creation and the environm

ent. Therefore, these are the activities which we have engaged in to portray the love and care for the environment.

On Saturday 9th June 2018, all the young people gathered up at the Serowe Bus rank and shopping complex, where we were litter picking in groups (3 groups) and also some evangelisation at the same time. It portrayed a good image to us as the young people because we were also joined by the diocesan youth chaplain the Revd. Bonny Bashe. We gathered up the litter in black bags where the municipal truck came and collected the full refuse bags when we were done.

After we returned back to St. Augustine’s, where we were exercising our second task which was the tree planting. It is actually a good experience, when we have church members who have the full knowledge about the life of the plants and nature, to be present and also to give their knowledge about tree planting. We had a congregant of St Augustine’s who is working at the department of forestry, who donated the refuse bags and gloves for the litter picking. Before the planting (25 trees were to be planted), he gave us an orientation of how must a tree or a plant should be planted, the chaplain blessed the trees before they could be planted,.

It was a privilege to me to plant the first tree within the church yard together with the diocesan Mother’s Union Ms Agnes Ncaagae. After the planting of 6 trees within the church yard, the rest of the trees were planted at the gathering places of the tribal councils according to wards in Serowe and the other trees were to be planted at St Augustine’s Primary school. It had a positive impact because one of the community leaders came to St. Augustine’s to join us for the rest of the conference.

I later gave a talk (presentation) about how the young people could be engaged in various programmes and be able to come up with initiatives to emphasise that Botswana diocese cares for the environment. The young people were interested because after the session I came across various questions about how can they start up these initiatives and also how are they being portrayed within the church calendar. It reflected to me that the young people of Botswana do have a huge interest in uplifting the environmental ministry.

Surprisingly good, on Sunday after the service, one of the MU congregants also from St Augustine’s, donated indoor and outdoor plants to the young people according to their respective parishes.

On our way back to Gaborone from Serowe, we stopped by the Tropic of Capricorn monument with the intention of taking pictures. It was sad to find that one of the most important international tourist site was surrounded by litter and it was unattractive and people were still continuing with littering. Goats and dogs were eating from the litter. As I said in my presentation that “The love of the environment begins with you as an individual then one can be able to teach others. It is so because cleanliness is next to Godliness!” We then picked up every litter and lowered down the overflowing dustbins and poured the litter inside four refuse bags. People who were there commended us for the good work which we did.

In general, it was a fantastic conference and also it was good to meet and have lovely conversations with the young people whom are willing and committed in working for the Lord. 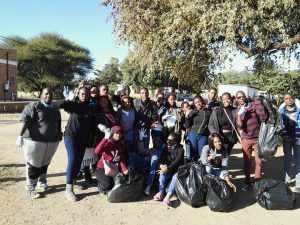