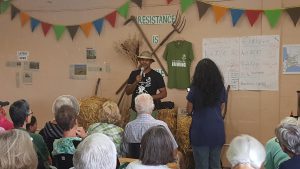 News of the threats to the Philippi Horticultural Area  and underlying Cape Flats Aquifer came to the attention of the Green Team of Christ Church, Constantia. They  approached the convenor, Nazeer Sonday, with the offer of hosting an information session so that concerned citizens, and particularly people of Faith, could hear the facts around the  threats to the Philippi Horticultural Area. More than 130 people attended the information meeting.

The Cape Flats Aquifer is Cape Town’s hidden treasure. A vast area of some 630 square kilometers of porous rock lies beneath the City – stretching from the Cape Flats to the West Coast  – it holds vast stores of underground water. Studies by the United Nations Environmental Programme reveal that the Aquifer has the potential to supply more than two thirds of the  Mother City’s basic water needs:

“The sustainable use of the Cape Flats aquifer… is estimated at 18 billion litres per year (49,32 million litres a day)”

The water from the aquifer currently irrigates the farms of the Philippi Horticultural Area. These farmlands are thus, uniquely in South Africa – drought-proof and produce 200,000 tonnes of food and employ  6,000 workers every year. Up to 80% of certain vegetable types comes from this area.  As a response to drought, innovative practices are being modeled offering the sustainable use of water.

The Philippi Horticultural Area is the key re-charge zone for the Cape Flats Aquifer that has not been paved over. In built-up areas, roofs and roads, pipes and drains carry stormwater into the sea and starve the aquifer. The PHA presents us with a unique ecosystem that produces food for the city, is the green lungs of the city, can supply the city with potable water and could  recycle waste water from the City’s waste water plants in Mitchell’s Plain and Strandfontein.

One portion of the rezoning has been denied by the Heritage department, which is a great encouragement, but a large portion is still under threat

The City officials were elected as the stewards of our resources, and these resources must be preserved for future generations. We cannot sacrifice our source of water, we encourage citizens of Cape Town, let us educate ourselves about the Cape Flats Aquifer, its custodian the Philippi Horticultural Area, and work together to protect this pearl beyond price.