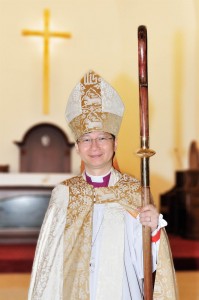 From the Chinese context, the biggest challenge is air pollution followed by both industrial and residential high rise development on the coast, blocking fresh air coming from the sea, along with sea level rise and changes in the climate, which has especially been observed in the last decade.

The bishop says, “In Chinese culture the land is our mother; we have a close relationship with the environment. So we try to turn to our biblical teaching. We can take the whole ecology idea from the Biblical teaching from Genesis to Revelation, from creation to the new heaven and earth. God not only changes the heart of the people, the problems are caused by the greediness of the human hearts. The only way to save our planet is to save the heart of the people.”

The Province has established a commission to promote environmental protection and teach ways to practically aid the situation but still must rely on the cooperation with the people and companies they serve to work with them to make their changes. They encourage churches to practice living simply, like replacing tea with big banquets and not eating shark fin soup, which has proven to put so much strain on the ecology of marine life.

“We join others is raising concerns and gather in multi faith forums coming together and raising awareness while asking ourselves if we can allow it to become worse and worse. We need to let the relevant government departments know, and other ecological societies. We need to come together. As Anglicans alone we will not be as effective as a larger faith community.” Bishop Chan described his aim as to “inspire people in every Church and faith community in every country to hold the environment in great respect, as well as to speak up for the vulnerable, who mostly bear the brunt of climatic destruction.”

Andrew Chan is the second Bishop of the Diocese of West Kowloon, Hong Kong Sheng Kung Hui. He was ordained as a priest in 1992 and trained as a music teacher in Grantham College of Education and did his theological training in Salisbury and Wells Theological College (1989-1991). In his previous ministries, Andrew served the Church as Bishop’s Chaplain, Diocesan Secretary and Provincial Secretary. He was consecrated the bishop of the Diocese of West Kowloon, on 25 March 2012 and was appointed as Sarum Canon in the Diocese of Salisbury of The Church of England in 4 October 2012.