Green Anglicans joined the  SAFCEI in their weekly vigil outside Parliament in Capetown.

Why is our government, a government of the people we hope, going in entirely the wrong direction to overcome inequality, poverty and unemployment? Our country needs labour intensive development that equips and builds our people. The government’s nuclear plan will bring about further conflict, inequality and social destruction.

The government may have only signed a nuclear co-operation agreement with Russia but the statement that South Africa has already signed such agreements with South Korea and the USA and will sign similar agreements with France, China and Japan shows the government’s clear commitment to nuclear, in spite of the warning of the National Development Plan (NDP) regarding costs. Why? Why is the government hell-bent on pursuing the nuclear energy route?

We can only presume that it is because of the immense amounts of money that is involved in nuclear, and the abundant opportunities for those in power to benefit, both legally and under the counter. Recall that the Arms Deal involved R70 billion. Now we are talking at least R1 trillion. And nuclear energy is dangerous stuff, so you have to keep it under wraps, hence the need for the carefully prepared secrecy bill. We will not be kept informed, never mind consulted.

Like millions in our country, I rejoiced when the ANC came into power. Why then do we see the government pursuing policies which enrich the powerful and further impoverish the poor?

Democratically, a major flaw is the belief that the victory in 1994 was that the ANC gained power. The victory was democracy, which the ANC had played a leading role in bringing about and must now defend. But democracy means human rights and participation and consultation and transparency and even the transfer of power through the ballot. Otherwise we transfer power from one authoritarian group to another.

Another hard won victory of democracy over the ages is “no taxation without representation”. It is acknowledged by the Department of Energy that we – the South African public – will have to pay for this “investment” of R1 trillion. Given that nuclear power construction invariably doubles in construction time and cost, we will be lucky if it is as little as R1 trillion.

Though the government won a majority of seats, in no way did we authorise them to indebt us to the Russians – or whoever – for the next 60 years, long after Jacob Zuma is dead and buried. What an alarming legacy to leave us. The President is meant to serve his country, not enslave it in debt.

The Southern African Faith Communities’ Environment Institute’s fundamental question is why the government is choosing nuclear as the right and best use of scarce resources in our young democracy, when there are so many better alternatives. We have never had an opportunity to engage with government over this, nor the courtesy of a reply, even when we have hand-delivered letters to the Presidency.

Three years ago the then Director General of Energy, Niliswa Magubane, stated “If the government wants nuclear, I will make sure they get it”. So nuclear was forced into the IRP (Integrated Resource Plan) though it was clear it was not needed.

A meeting of faith leaders early last year resolved to approach government urgently to express our deep concerns regarding the socio-economic implications of choosing nuclear energy. Together with SAFCEI’s letters, statements from the KZN Inter-Religious Council, signed by Cardinal Napier, and the WC Religious Leaders Forum were resent to the President and the Deputy President, who was chair of the National Nuclear Coordinating Committee until President Zuma took it over.

This move by President Zuma ended the promise of a meeting with the Deputy President whose office admitted that the President and government ministers attended nuclear events but had not allowed the same engagement with civil society.

We thought we might get a hearing in the Parliamentary Energy portfolio meeting of “stakeholders and nuclear energy”. Civil society participants were subjected to two hours of what is best described as nuclear propaganda by the Department of Energy and NECSA. We learnt nothing new, but the old untruths, such as “only coal and nuclear can provide base load electricity”, “nuclear energy will employ thousands” and “nuclear energy will bring electricity to all the people of SA” were reitereated. Nonsense. Centralised electricity generation cannot reach the two million rural households scattered across our country. Only decentralised renewable energy (RE) can do that.
After the presentations the chair announced that the many members of civil society in attendance had three minutes each to comment. When challenged he asked if we really expected the portfolio committee to change government policy.

We then heard that the government’s response had been to budget R300 million to convince the ignorant, fearful SA public that nuclear energy is quite safe.

So we ask “where is democracy, transparency, accountability in our new democracy?” Why are we so concerned?

Why do we say the nuclear energy route is taking us in the wrong direction democratically, socially, financially and environmentally?

Our urgent priority is to overcome inequality and poverty. To do this we must train, equip and capacitate our people. As Bongani Coka, chief executive of Productivity SA, recently stated, “A country may have many positive elements – mineral wealth, diverse natural and cultural assets, but its most enduring strength will be its people…The upliftment in the skills and education levels of our people is critical…Our people will ultimately drive the development of our economy.”

I continue to be amazed that this government of the people thinks it more important to spend the equivalent of our annual national income on nuclear energy rather than training, developing and building our people and communities. Is the government blind to the more than 2,000 service delivery protests annually, 200 of which are seriously violent? Protestors do not see the government of President Zuma serving the people but enriching themselves.

The decisions to pursue nuclear energy and frack for shale gas is proof that the government is more concerned about centralised capital intensive energy that recognising the priority of responding to the needs of the people. Nuclear energy will not overcome our service delivery failures.

As one of the richest countries in Africa, we have no excuse for the poverty and inequality we find in our beloved country. Millions are still without water, sanitation and housing while others live in excessive luxury with golden handshakes of many millions. Are the rich, who hide behind electric fences, surprised by the alarming levels of crime and violence? It does not have to be, and should not be like this. In most countries of the world, citizens can walk the streets without fear.

Investing in nuclear energy will entrench inequality and benefit those in power and the already rich. We have the highest levels of inequality in the world. Our horrendous crime and violence is a consequence. The obvious answer is decentralised renewable energy that empowers local communities, and can employ thousands. Nuclear will employ a handful of specialists, many sourced at great cost from outside our borders.

We need low carbon labour intensive development that will employ the millions of young people who leave school without skills. It can be done, but not if we put all out wealth into high energy, high capital projects that benefit the capital investors and do people out of jobs.

Financially, nuclear simply does not make sense. We are already risking our credit rating over Medupi coal power station. However it is structured, we the public will have to pay for the nuclear development. We also know that both coal and uranium are increasing in cost and that nuclear power stations are notorious in their overruns in construction time and cost.

Contrast this with RE that will be paid for by private investors, not the state. It can be up and running within two years, can be decentralised, is decreasing in costs and has no escalating fuel costs! In one year, 2011, Italy installed 9.6 GWs of rooftop photovoltaics. With all our sun, why bother with nuclear which will take at least ten years before we benefit?

On top of that, Grand Inga hydro could provide all the electricity we need.

Environmentally, it is increasingly clear that to confront climate injustice, we have to follow the RE route. Nuclear is not a low carbon alternative to coal, nor is it as safe as the nuclear lobby claim. It is 1) grossly selfish and irresponsible to leave future generations with our toxic waste, and 2) when there is an accident at a nuclear plant, it has multiple disastrous consequences. These simply don’t apply if a wind turbine or solar generator is damaged.

On top of this, South Africa has some of the best solar and wind resources in the world, so why not utilise them to the full extent? We simply do not comprehend why the government continues to court the international nuclear community when all the evidence shows that it simply does not make sense.

In April this year, the then Deputy President Kgalema Motlanthe and the then Finance Minister, Pravin Gordhan, invited religious leaders to meet in Pretoria. The purpose was to encourage the faith communities to join in celebrating twenty years of democracy. We were shown excellent presentations of the advances we have made over the past 20 years. We rejoiced over this.

I took the opportunity of reminding the Deputy President that we had been scheduled to meet with him over the nuclear issue and said that unless the government consulted civil society over nuclear and fracking, they would bring about the same conflict situation as was already being experienced over e-tolling.

The faith communities had asked Nazir Alli in 2004 to consult regarding tolling. Far from doing so, SANRAL continued to press ahead with the Wild Coast N2, the Winelands N2 and e-tolling, all of which are strongly opposed by the local communities.

The government knows the importance of consultation and transparency. If they persist in bulldozing ahead with both fracking and nuclear, they are headed for the same conflict being experienced by e-tolling.

The then Deputy President, in summing up the meeting, told the Minister of Finance that following the elections meetings should be arranged with civil society and faith communities over these issues. To date nothing further has transpired.

History has shown that when secular authorities disregard the ethical and moral call of faith communities for justice and fairness, the consequences are dire. We are in this position now. If President Zuma does not place the well-being of people and planet above the immoral pursuit of private gain, conflict and strife will get totally out of hand. Are we not already in a perilous state, socially, financially and environmentally?

South Africa was one of the few instances in human history when those in power shared before an all-out conflagration. We amazed the world with our relatively peaceful transition to democracy. May this government do the same, and heed the call of concerned citizens and faith communities to overcome inequality, seeking economic justice and following an energy course that benefits and empowers the people, without destroying the future well-being of people and the planet, or bankrupting our young democracy. 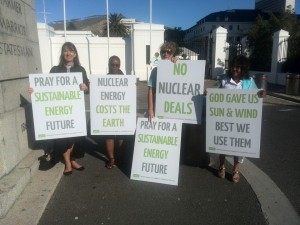