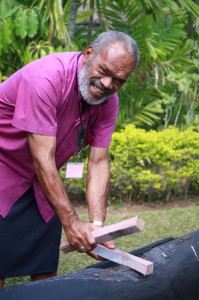 Bishop Apimeleki Qiliho is an indigenous Fijian  from the Fiji Islands. He leads the Diocese of Polynesia or Tikanga Pasefika in the Province of  the Anglican Church in Aotearoa, New Zealand and Polynesia.

Qiliho started seminary to become a priest during the early 1960s while staying in New Zealand. After ordination he had postings to parishes around Fiji and become Vicar General. His involvement and service has also reached to further organizations including the Pacific Council of Churches, The Fiji Council of Churches and he serves as President of the Pacific and Fiji Bible Society. He also does work with organizations concentrating on AIDS relief, youth and other NGOs in Fiji and the region. Qiliho also been published in the Fiji Times newspaper as a columnist. Bishop Apimeleki lives in Labasa  with his wife Taomi. He has four children and eight grandchildren.

It is very exciting that at their synod in 2014, the Province passed a resolution that requires the Anglican Church in Aotearoa, New Zealand and Polynesia “to take all reasonable steps” to divest its shares in fossil fuel companies by its next Synod, in mid-2016. They were the first province in the Anglican Communion to divest from fossil fuels!

In a release written by Qiliho called ‘Care for the Environment – A Devine Mandate’ the bishop said, “God had given Christians a mandate to look after the earth and they need to show moral courage by asking themselves how they and their communities could be better stewards of creation.”

He continues to write, “In no other sphere of current concern has there been a more religious tone to public awareness than in dealing with issues concerning the natural environment. For it is here that we come face to face with the fundamental question of our place in the universe and our responsibilities for it; with the destructive potential of our human intervention on the one hand, and on the other, the awe-inspiring beauties of so many life forms now at risk due to climate change… Creation has its own dignity as God’s masterpiece, and though we have the mandate to use it, we have none to destroy it.”

The islands of their Diocese and Province are facing severe challenges as a result of climate change. The whole Diocese is being faced with storms  and sea level rise. This  a serious challenge in the various Pacific Island Nations, increasing the poor quality and the shortage of water,  eroded and impoverished soil, the destruction of forests, species extinction, and damage to marine life.