At a vibrant, action packed evening with much fun and laughter, members of the AYF from 5 Dioceses introduced their friends and colleagues to some critical environmental issues through  a series of thought-provoking eco-dramas.

Using background information, groups were tasked with developing a story around a contextual environmental issue in their own Diocese. In ten minute presentations, each team of actors had to do a performance that was not only factually correct but one which offered a sense of hope with positive and practical suggestions for action and change.

The  winner of the SAFCEI ‘Earthkeepers’ prize was Port Elizabeth Diocese with their enthusiastic production on the theme of illegal dumping.  They acknowledged many pressing social issues which make it difficult to respond to long term environmental challenges. They highlighted the ethical responsibility of the church in playing a leadership role. There were two ‘runner up’ performances.  False Bay Diocese contrasted rural and urban perspectives on the value of water and Saldanha Bay did a clever ‘one man show’ about climate change.

Drama, in all its many forms, allows for experimentation, social critique and self-expression. There is no better way of learning about issues affecting our communities than through sharing our lived experiences! 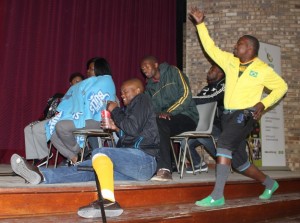