At the Diocesan Synod of the Diocese of Saldanha Bay, Bishop Raphael Hess address the challenge of exploitation of the Earth’s natural resources. 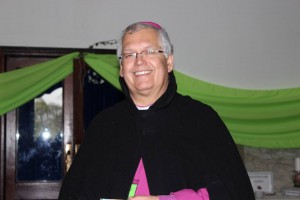 For decades, as an example, the mining sector has lived by this false ideology, proclaiming that the earth and its contents belongs to those powerful enough to control the land. For years and years in our own country, that ownership has resided in the hands of a few, usually internationally connected corporate players, largely enriching European interests. In the ideology of the false-self, the earth becomes an object to be owned, controlled and dominated, its wealth to be exported and serve the interests of an elite. This ideology has no conception of the earth as ‘our common home’ (our oikos) as Pope Francis has described it in his searching and prophetic encyclical on the environment. Listen to how the encyclical Laudato Si puts it. Describing our attitude towards the earth, he says:

“We have come to see ourselves as her lords and masters, entitled to plunder her at will “Confirming climate change as a major issue, the Holy Father continues:

“Climate change is a global problem with grave implications: environmental, social, economic, and political and for the distribution of goods. It represents one of the principal challenges facing humanity in our day. If present trends continue, this century may well witness

Extraordinary climate change and an unprecedented destruction of ecosystems, with serious consequences for all of us.”12

The flagrant disregard of the consequences of our actions; the unwillingness to put people before profit; the mad rush to extract all of the earth’s contents  all of this behaviour flows from an ideology void of moral principles, lacking in an understanding of community and unwilling to work for the common good. That, I’m sure Merton would have said, is the cult of the shadow! “We don’t inherit the Earth from our Ancestors”, the great Chief Seattle is reported to have said, “we merely borrow it from our Children”