The Anglican Archbishop of Cape Town, the Most Revd Thabo Makgoba, has appealed to the South African government to scrap plans for developing nuclear energy and instead to spend the money on education, training and other development initiatives.

We should not impoverish the country through incurring unaffordable debt through attempting to obtain loans or providing guarantees for Eskom to raise loans for nuclear power stations.

“The Synod of Bishops acknowledges that President Jacob Zuma committed the government in last year’s State of the Nation address to procure new nuclear energy only on a scale and at a pace that the country can afford.

“We also welcome the president’s acknowledgement in this year’s State of the Nation address that renewable energy will be an important part of the mix of energy sources in the future.
“However, nuclear energy still remains part of the mix, despite the conclusion in the Department of Energy’s updated Integrated Resource Plan that additional nuclear power, originally expected in 2023, will not come on stream until 2037.

“Solar and wind generation of power is becoming cheaper and cheaper to develop. By 2037, the energy generation scenario is likely to have changed completely.
“
“We are deeply concerned that an expanded nuclear energy programme will become an albatross around the necks of our children. And we cannot leave to the generations to come the task of disposing of our nuclear waste.

“We believe that South Africa has the potential of becoming a renewable energy hub for Africa, with huge potential for investment in manufacturing and associated employment. We note that overseas investors are queuing up to invest in our renewable energy programme and since the design of the programme is such that they provide the finance, this does not burden our people.”

Protesters said the proposed nuclear plans were unnecessary and a waste of money.
The Right2Know Campaign’s Vainola Makan said there was secrecy in government’s plan and it would take away from the poor.

“They want to take more than R1 trillion from the coffers and spend it on nuclear energy, which has not been identified as a priority by government’s own reports.”

Nosisa Bulose of Green Anglicans said “Building these nuclear plants will lead the country to more debt and the people to more poverty. Green Anglicans plead the government to search for more environmentally friendly ways of generating electricity” 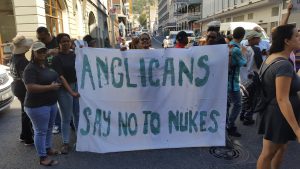