. These denominations are the Roman Catholic, Methodist Church, Lutheran Church and the Anglican as the host.Before the games started there were  talks on different subject that affect youth in general and Environment issues. Mncedisi Masuku of the Green Anglicans Movement was given a slot to address the green movement. He addressed the importance of the church to be engaged on environmental issues as it is the first commandment. He then shared some of the activities done by the young green Anglicans movement and challenged the Catholic church to be  Green Catholic and the Methodist to be a Green Methodist. He has appreciated the partnership they have with the Lutheran church to fight Climate change and he invited the Methodists and Catholics to join the movement as this is not about the Anglican but about our call as the church to be earth keepers.

The youth desk from Swaziland Council of Churches appreciated the subject presented by Masuku. They will have a youth convention in august and Masuku is invited to come and  unpack the subject where all member churches will be represented. The Green Movement is getting out of the Anglican boundaries and becoming  a movement by the body of Christ in Swaziland.

At the end of the event the young green Anglicans presented a tree to be planted that seals the relationship between the four denominations in their commitment  to fight climate change. The tree was planted in the Catholic Church compounds and they have to be next in organising an event that covers all denominations in fighting Climate change. 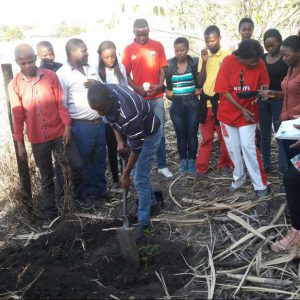