“We want to be the generation to make a difference”. That’s what 10 year Tia Cartoulis said in regard to rhino poaching. Her generation is watching the state of our wildlife – particularly rhinos which have been hit hard over the last few years by poaching. Last year saw 1 004 rhinos lost and this year’s figures have far exceeded that.

Tia has been raising money for Rhinos Without Borders whose goal it is to move 100 rhinos from poaching hotspots in South Africa to safe havens in Botswana. She’s spent all her time making loom bands and selling them on weekends, raising an impressive R3 000. She wanted to do more so asked her school, St Cyprian’s Preparatory if there was a project that they could do together to create awareness and raise funds. Even though the end of the school year is a busy time, Justin Skea, Principal of the Prep School couldn’t refuse a passionate pupil. They decided to make an origami rhino for each rhino poached last year to show the true impact that a number simply can’t quite convey.

The challenge was on. Each pupil was to attempt to make 3 origami rhinos, which would bring their total to the required number. For a few days before the challenge they raised funds, and on the day started folding origami rhinos. By the end of the day the school chapel had an astonishing 1 200 origami rhinos laid out down the centre aisle. They’d exceeded their target and had made what is likely to be this year’s final poaching total.

Their efforts realised a total of R16 611.75 to be donated to Rhinos Without Borders – enough to pay for two VHF horn transmitters, which will track the rhinos in their new environment as well as satellite tracking time for two rhinos for an entire year.

The St Cyprians students are the first Rhinos Without Borders ‘Rhino Innovators’; school students who are using innovation to come up with creative ways to raise awareness of the plight of rhinos and of the initiative.

1 200 origami rhinos, each one representing a poached rhino makes for a somber image. However the passion that these girls displayed brings hope as well – that this may indeed be the generation to make a difference. 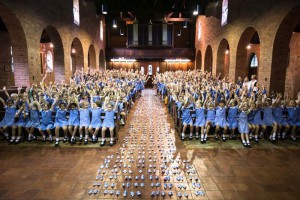 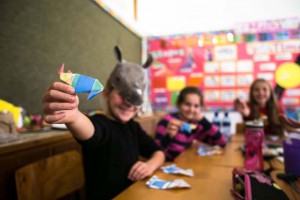