The 2018 Parliament of the Worlds Religions took place in Toronto, Canada. The program featured more than 500 programmes and events. An important new track was added for the first time this year”Climate Action Track: Care for Our Earth, Responsibility for Our Future”

Canon Rachel Mash of Green Anglicans was invited to join the plenary session on Climate Justice as part of the panel of “frontline witnesses,  voices from communities impacted by climate change

Brazil’s Amazon – the frontline witness was Davi Kopenawa a spokesperson for the Yanomami people who is leading a campaign to secure Yanomami land rights. . His courage, combative spirit and tenacity are reflected in his Yanomami nickname, ‘Kopenawa’, or ‘hornet’. Since 1985, Davi began to fight for the recognition of the vast area inhabited by the Yanomami in the Brazilian states of Roraima and Amazonas. Goldminers were invading the area, and Yanomami were dying of diseases to which they had no resistance. In 1989 Davi won a UN Global 500 award in recognition of his battle to preserve the rainforest. In the course of his travels, Davi has met four Brazilian presidents including President Lula, Al Gore – former vice President of the USA – and Prince Charles. The Yanomami area was officially recognised by the Brazilian government just before it hosted the UN’s first Earth Summit in Rio de Janeiro in 1992. Covering over 9.6 million hectares, it is one of the planet’s most important reservoirs of genetic diversity, as well as being home to some 16,000 species

“The world needs to listen to the cry of the earth, which is asking for help. If you carry on killing people and you continue to destroy nature and you take out all the oil, the minerals and the wood, our planet will become ill and we’ll all die.”

Angaangaq Angakkorsuaq, is an internationally respected Elder  from Greenland, the only country in the world where man lives and there has never been war. His commitment to the environment and indigenous issues has brought him to 5 continents and 70 countries in the world. Angaangaq bridges the boundaries of cultures and faiths in people young and old as he advocates for a spiritual climate change.  He has been invited to speak at the United Nations, at universities, schools, social work programs, prisons, at spiritual and religious conferences, and for medical, scientific and government organizations  Always there is a transformation and a new understanding.

Here is the text of Rev Rachel’s speech

“At the start of this year we were told that on the 22nd of April, all the taps of Cape Town, a city of 3 million people would be turned off. What did that mean? 400 temporary taps would be set up with enormous queues of people waiting in line under the hot sun  for 20 litres of water a day per person. The army would be deployed because of potential violence that would break out. Schools would close as there would be no toilets working and businesses would shut down. There were fears of outbreaks of disease as the sanitation systems broke down. It felt like the apocalypse..

After three years of the driest winters for 100 years, the dams were nearly empty – our biggest dam was sitting at 17 percent, and the dams were emptying at 1.5% a week. Cape Town has always had long wet winters and the climate has changed radically.

So what happened? The city rallied together –  people shared water saving ideas, there were competitions, social media went wild. We washed for 1.5 minutes every second day. We reused water from washing machines first to clean the floor then on the garden. We stood in queues to get water from the springs. Taps in public restrooms were turned off and replaced with hand sanitizers. We reduced our water consumption by a massive 50%   And slowly, day by day we pushed back day zero – until the winter rains came. Thank God they were good this year. But last week as I left Capetown we were having the hottest day in October for 50 years. We were a rainy city but drought is going to be the new normal for us.

We survived – battered but we survived. 30000 farm workers lost their jobs – mostly casual workers and most vulnerable. The tourism industry was impacted with again the least well paid the most affected.

How did the faith communities respond? First of all we were on our knees praying for a miracle.

And then we released that we must pray for something deeper – we needed to pray for two things – to give thanks and realise again that water is sacred, and a gift from God. As christians we  became members of the family of God through the sacred waters of baptism, water is our primal element. Our Muslim brothers and sisters wash their hands before prayer each time.  Water flows through the pages of our sacred scripture. At the start of Creation the Spirit of God was hovering over the waters through to Revelations – where the waters of life flow from the throne of God > Water rushes, gushes pours through the pages of the Bible 722 times!

Secondly we need to work for water justice – in our next door country  Namibia their drought was much more severe the previous year. The northern communities are very dependent on their cattle – your cows are your saving for the future – your child’s high school education, your daughter’s wedding.  The drought was so severe that they were told to bring their cattle in for slaughtering before they became worthless.

When we told them we were down to 50 litres per day they laughed and said wow that is a lot of water!

Cape town is the canary in the mine. It is a wake up call for us all

People we need to stop praying for rain in areas with drought – we all went to school – we learned the hydrological cycle.  We know how rain is made, we understand that if you heat the planet, and cut down forests  then there will be more drought

The Scientists in the IPCC report have told us – 12 years to change our dependence on fossil fuel or we face a world of uncontrollable climate change.  Day Zero is coming for us all. This is the THE human rights issue of our time

The world has already warmed by 1 degree. At 1.5 degrees the average drought length in Capetown will increase by four months. At 2 degrees it would increase by six months  and at 3 degrees a staggering 19 months without rain.

In the bible in Romans 8  we are told that Creation is groaning in Child birth = what an amazing image – the agony of the current sufferings – but a new life is being born.  Creation is standing on tiptoe waiting for the children of God to be revealed that is you and me.

Gus Speth who was the environmental advisor to Bill Clinton  said this:

I used to think that top environmental problems were biodiversity loss, ecosystem collapse and climate change. I thought that thirty years of good science could address these problems. I was wrong. The top environmental problems are selfishness, greed and apathy, and to deal with these we need a cultural and spiritual transformation. And we scientists don’t know how to do that.” 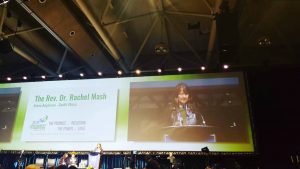