NO TO NUKES AND NO TO CORRUPTION 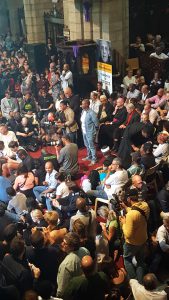 St George’s Cathedral in Cape Town was packed to capacity for a memorial service for the late Achmed Kathrada  affectionately known as Uncle Kathy.

The event turned into a memorial for the ANC of Mandela, Sisula and Kathrada as the current ANC has been taken over by “state capture” and corruption. The event was supported by a broad range of religious leaders, trade union and civil society. Organisations such as Right to Know, South Africa first, Treatment Action Campaign, Legal Aid and SAFCEI were all present in large numbers. SACP’s Jeremy Cronin and student activist Fasiha Hassan were among the speakers.

Pravin Gordhan, the recently fired and well respected minister of finance spoke with great eloquence, urging South Africans not to lose hope There were still millions of activists around the country who remained faithful to the ANC of Kathrada, Nelson Mandela, Oliver Tambo, and others, he said, adding that there was still hope for the party. He also called on South Africans to “join the dots” on what is currently happening in the country. Collective action is what was needed to uplift poor communities, and it required social justice to be rooted in every South African’s genetic makeup.

Ncumisa Magadla from Green Anglicans supported Siphokazi from SAFCEI in reading out her impassioned speech against the nuclear deal:

Ahmed Kathrada got his first taste of politics when he was 12 and served his first stint in jail for political activism at 17.  He was an inspiration to youth to become active.

I am a young black woman, a South African who believes in a democratic country.

I am part of the Right2Know campaign. Because people have a right to know what is going on.  People have the right to have information about matters that affect us.

And not only to know about issues, but also to have a say, to be consulted. For youth will have to live with actions of this government. The consequences of the actions of today will be with us, the youth and our children forever.

So now we come to this nuclear deal.  The nuclear agreement was signed with Russia in 2014, but I only heard about it in 2016, two years later. The first I heard of it was when I attended a workshop in November last year.

That day in November last year we gave a letter of demand to parliament demanding they have public hearings, to hear the voice of the people. To this day, they have not listened.  Government doesn’t want to listen.

I became a Southern African Faith Communities Environment Institute – Safcei- Youth Ambassador to try to explain to others what is happening. What is happening in this country around us, because so many people don’t know.

Two organisations, SAFCEI with Earthlife Africa Joburg, have taken the government to court over the secret nuclear deal.  The court case was supposed to be heard in mid-December.  But government used dirty tricks to duck the court and delay the case. Finally in February this year, the case was heard and we believe it will be successful, we are waiting to find out.

We as the youth of this country don’t only want to be given the name of being “tomorrow’s future” yet not having any input in any decision-making. We don’t want to be told that we are the future but without having any input into the future at all.  We want to be acknowledged, and recognised with whatever capacity we have, and whatever background that we come from.  We can have an input into creating the society we want.  In all the decisions that are made now, we will only be happy to own them, make changes to them, and be accountable for them, if we were part of deciding them from the word go.

As youth, we refuse to pay for the nuclear deal that will take away so many things from the bright future of this country.