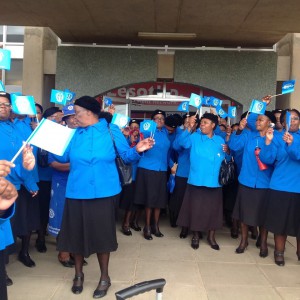 The Mothers Union Provincial Council held their historic 50th Council meeting in Maseru, Lesotho from the 9th to the 13th of December  2015.

One of the important issues that the executive members of Dioceses from across Southern Africa (RSA, Lesotho, Namibia, Angola, Mozambique and Swaziland) addressed is the growing Environmental Degradation and Climate Change.
They were challenged in a presentation by the Provincial Environmental Coordinator with the question “What kind of world do you want to leave for your grandchild”

Following this presentation a motion was passed that  “the MU Provincial Council commits to the promotion of green clean environments through:

Polystyrene (or Styrofoam) has  huge environmental impacts on God’s Earth. It  takes  at least 500 years to decompose. The production of Styrofoam is energy intensive and it is petroleum based.  It is  not usually recycled due to its lightweight nature and the high economic cost of transporting and degreasing the petroleum-based material. It is the primary source of urban litter. It is also one of  the main pollutants of oceans, and other water sources, causing choking  and starvation in wildlife.

It also has health impacts since it is made from Benzene and Styrene, both of which are carcinogins (cancer causing). Microwaving Styrofoam causes the release of toxic chemicals, which pose a threat to human health.

We salute the Mothers Union for leading the way in this important resolution.