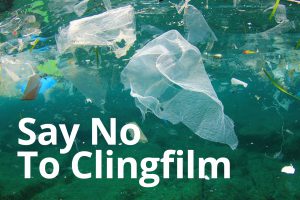 It is time to destroy everyone who has destroyed the earth.” Rev 11:18

Cling wrap (Plastic wrap) is not only bad for the planet, it is bad for your health.

What is the threat to human health?

Plastic is made up of chemicals, and there has long been concern surrounding the leaching of these chemicals into the natural environment, and transference of them into our food and drink. This worry has led to the recent popularity of ‘BPA-free’ plastics for food and drink storage. However, the main problem with cling film occurs when it is heated up:

“Even Cancer Research UK, which has so far been sceptical, is now warning that cling film should not be allowed to touch the food it is covering during microwaving.”

How does cling film impact on the environment?

Like other non-recyclables, plastic food wrap ends up on landfill at best, and as litter on land and in the sea at worst. On landfill it will sit and possibly leach its chemicals for years, not degrading, and elsewhere it will do the same, whilst also being a risk to wildlife or fish who may get caught up in it or eat it.

How to replace cling film in the kitchen

Replacing cling film in the kitchen is easier than you might think. Here are some simple ideas on how to do it:

Have a look for beeswax covers, you might be able to purchase them in your area – they make a great gift! Beeswax wraps are made by infusing pieces of cotton with a mixture of food-gradebeeswax, pine rosin and oil, usually jojoba or coconut. The waxy coating makes the cloth waterproof, but breathable. While you can make wraps without the rosin, it’s the key ingredient that makes them “sticky”, like plastic wrap.