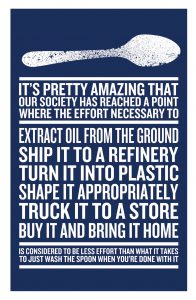 “Do not pollute the land where you live and where I dwell, says the Lord” Numbers 35:34.

Fast food joints offer plastic forks, knives and spoons. More than half of these are thrown away without being recycled.  What happens then?

When you throw something “away” there is no such place as “away” – it goes somewhere. Blown by the wind, taken by the rain, they often end up in rivers and oceans.

Fast foods are often consumed outside when people are travelling, the cutlery gets thrown out of the car.  Domestic and wild animals will feed on these items, with some animals mistaking them for food, and end up being choked to death or causing severe injuries to their bodies. The consumption of plastics can also clog up the stomachs of the animals if they don’t injure or cause their death.

Plastic cutlery has a lot of impact even before it gets to the market. This is because there is a lot of energy and carbon that are emitted during their production leading to the addition of heat and carbon to the atmosphere. This carbon, in the form of carbon dioxide, combines with other greenhouse gases such as methane and end up causing devastating climatic changes.

The presence of plastic cutlery on large water bodies means that there is a cause of suffocation for the marine life. Various species in marine waters depend on the circulation of air that comes from the atmosphere and diffuses into the water. Moreover, some of these small plastic cutleries such as spoons and forks can be ingested when mistaken for food by the marine life leading to death. Fishes can also be entangled in some of these cutleries leading to suffocation. When fish have consumed tiny particles of plastic, it becomes more and more concentrated as it moves up the food chain and is eventually eaten by humans.

At times, some people resort to burning the cutlery plastic waste, which ends up releasing lots of toxins into the atmosphere. These toxins mix with the same air that living organisms, both plants and animals, take up. The take up of this contaminated air over long period of time may lead to a myriad of respiratory diseases for humans, especially those that can be cancerous.

The sea bed is also becoming a deposit of plastics. Plastics have also been found on islands in the middle of the Pacific Ocean. During a study trip by scientists to  Antarctica, whose climatic conditions do not support human life, plastics were discovered there.

Eating hot meals from plastic cutlery is particularly dangerous as when plastics are exposed to high temperatures , chemicals are released which then get Consumed  with the food.

What can we do?