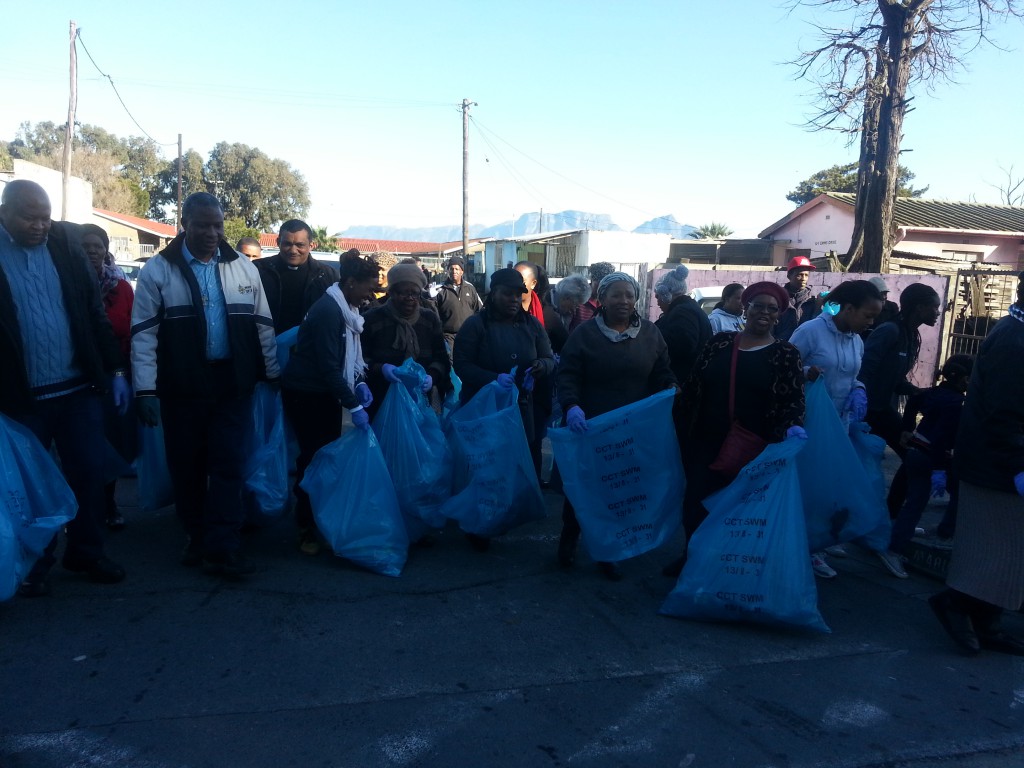 On a very cold Saturday morning, on Madiba’s birthday (18 July 2015), Archbishop Thabo Makgoba partnering with Holy Cross Nyanga and Green Anglicans honoured the late President, Dr Nelson Rolihlahla Mandela. Mandela Day 67 minutes, a symbolic act of public service, was combined with Archbishop Thabo’s campaign against inequality and to conserve the environment. This campaign was welcomed by the Archdeacon of Ibongoletu – the Ven Mzolisi Mpambani as well as Priest in Charge of Holy Cross

Nyanga – the Revd Ernest Mototjane. They were accompanied by parishioners and the youth – AYF who were the driving force behind this campaign. The Holy Cross Nyanga AYF with the Motale Trust later distributed socks for homeless people and delivered soup and bread in celebration of Mandela Day.

The cleaning – up started at Holy Cross Church, Nyanga with a prayer from the priest in charge. A welcome was followed by an address by the Archdeacon Mxolisi Mpambani and Mr Vuyo Zondani the Ward councillor applauding the church participation in uplifting the Nyanga community. Nyanga, well known as number one with its crime rate in Cape Town, was blessed with the presence of Archbishop Thabo. He walked the streets moving to the taxi rank focussing on cleaning the poverty stricken streets, accompanied by Bishopscourt staff, clergy, and fellow Anglicans.

This 67 minutes clean-up campaign ended with a period of reflection from Archbishop Thabo, a moment of silence, and an address to the community to commit to act on daily cleaning, reduction of crime and inequality. A huge thanks to SAPS Nyanga for patrolling during the campaign and all stakeholders for the donations. Homemade jam jugs were given to the community by Greenways Hotel and Archbishop Thabo also donated socks in aid of the AYF campaign “Warm Feet.” A prayer and vote of thanks from Archdeacon Mpambani concluded the clean-up campaign.