LEARNING ABOUT RUBBISH CAN BE FUN!

St Dominics Church in Hanover Park has been running a holiday club for many years to provide a safe space for children during the cold winter school holiday.

This year they invited Green Anglicans to lead a session with the young people. We didn’t know learning about rubbish could be so fun!

One game was called “ten things I find in the river”. Each group was given the name of an item such a KFC packet, baby’s nappy etc which is sadly found in a river. They had to draw it for their group and the person who got it right rushed back for the next word. It was sad to reflect on all the rubbish in the rivers

Next the groups were given magazines and hunted for pictures of the bad things that we do to other people (violence, crime, abuse etc) and the bad things we do to the world (pollution, littering, junkfood etc).  The young people explained what they had stuck onto their posters and it was wonderful to see what a lot of knowledge they have!

Then we learned that when Jesus died on the cross, he died to save the humans but he also died to save the whole world – those rivers , the endangered animals, the polluted air. He is wanting us – who have the name of “Christ-ian” to work with him to be part of healing the earth.

So the session ended with a competition to which team could collect the most rubbish in the shortest time.  Our little contribution to healing the world! 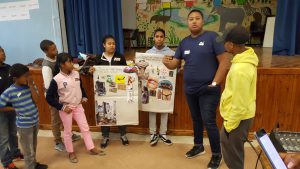