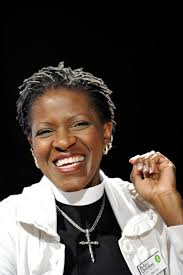 “Like Father like daughter”, Rev Mpho Tutu  was the key note speaker at the Launch of the Fossil Free South Africa campaign in Cape Town. She reminded us of the sanctions against South Africa which were one of the most crucial issues that brought the apartheid government to the bargaining table. To bring down apartheid seemed impossible – but “it is only the impossible which is worth doing”

Those who emit the most carbon are the most cushioned from the effects of climate change. The search for fossil fuels leads to an  increase in  violence and wars, climate change is increasing the  refugee crisis as people are forced off their land.

We have clean energy alternatives, but we don’t explore them because of the dominance of the fossil fuel industries.

“We are stealing from the generations yet to come”

The South African divestment campaign was launched at the University of Cape Town in 2013 and is building up traction. David le Page one of the founders said that there are currently roughly $28 trillion worth of fossil fuel reserves in the world. We can only burn $6 trillion of them if we are stay in safe limits of carbon emissions. That means that $22 trillion of fossil fuels are unburnable

The concept of divestment is to remove reserves and savings from fossil fuel companies and to invest them with more ethical portfolios. The challenge in South Africa is that there are currently no such ethical portfolios as exist in other countries. Divestment campaigns have been very successful with USA universities, and the Anglican Church in New Zealand has agreed to divest.  In the last two years since the divestment campaign started globally,  $50 billion has been shifted from fossil fuels to other investments. This is a serious amount of money , when we realize that the UN Green Fund has only raised $2billion to date.

You can find out more about the campaign on

1 thought on “LAUNCH OF THE “FOSSIL FREE SOUTH AFRICA “ CAMPAIGN”