I WANT TO HEAL THE WORLD AND HAVE FUN DOING IT

The Elsies River is the longest River in Capetown, it rises in the Tygerberg hills and flows out into the Black River. It has become very polluted, as all along the length of the river storm water flows from roads into the river. Pinelands is the final stage of the River before it reaches the Black river and the litter then reaches the sea.

At a World Water day service at St Stephens, Pinelands, the idea of Renewing the Elsies River was born following a sermon on Revelations 22:1-2

22 Then the angel showed me the river of the water of life, as clear as crystal, flowing from the throne of God and of the Lamb 2 down the middle of the great street of the city. On each side of the river stood the tree of life, bearing twelve crops of fruit, yielding its fruit every month. And the leaves of the tree are for the healing of the nations.

The Elsies Kraal river had been canalized, so that the water rushes out to sea and no longer is a living river of life. The renew the Elsies group was started and has developed into a community project.

Since March the Renew campaign has started twice monthly clean ups along the river. Natural vegetation is being left to grow in the cracks of the canal so that water can seep down into the soil. A garden of succulents has been developed. A 100 Tree Plant Festival is planned for after the dry season.

Due to the concern about plastic going into the river,  it was decided to embark on a #plasticfreepinelands campaign. The first challenge is to get all the restaurants and shops in Pinelands to stop using plastic straws.

A final event for the year was held pruning back some of the overgrown plants and removing aliens.

Young and old joined in – new friends were made and a lovely end of year tea was held at the house of Prof Njabulo and Mpho Ndebele’s home which is on the banks of the River. 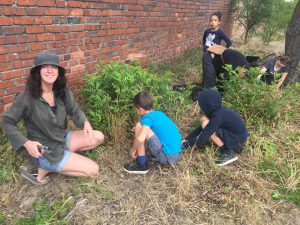