Historic gathering of the Portuguese speaking dioceses of Africa

Young people from three Portuguese speaking dioceses in Mozambique and Angola have this week taken part in an historic first joint meeting. The two countries are both Portuguese-speaking, but as they are separated by more than 2000 km, contacts between them have been few up to now. But now young people from the dioceses of Lebombos, Niassa and Angola, gathered from 25 to 30 November at the diocesan centre in Maciene, in the Mozambique province of Gaza.

Green Anglicans led a workshop on environmental mission. All these dioceses have been badly affected by climate change. Mozambique  has suffered from devastating floods, whereas Angola has undergone crippling drought.

The workshop started with a presentation looking at the effects of climate change, and the theology of caring for creation. The meeting also included a workshop on the actions that young Green Anglicans can take; and a presentation on the Anglican Church of Southern Africa’s Sunday School Portuguese manual, Ryan o Rinoceronte.

The three dioceses then prepared action plans for the year ahead:

The diocese of Lebombos in southern Mozambique are going to take up the challenge to be Green Anglicans and  will have a tree planting campaign between January and March and will develop a nursery. The diocese has a Sunday School project called Little Seeds of God, which teaches children to save and plant seeds whenever they eat fruit. This project will be rolled out during the whole year. They will have quarterly clean-up days, and then environmental training in April and November. In the first quarter of next year they plan to establish parish vegetable gardens. They plan to roll out recycling during the next two years. They will run an awareness campaign in December, March and July.

The diocese of Angola is calling their programme “O verde no meu habitat” – “Greening my habitat”; and they plan to celebrate “Green June” at their youth conferences in June. They are going to call on each and every young person to bring a tree to plant in their local church every year. The young women’s network is going to take up the Little Seeds of God project and teach children to save seeds from fruit so that they can plant fruit trees in their churches, districts and schools. This programme will be monitored by the young women’s network who will assist the children with the planting.

The diocese of Niassa is going to use their diocesan youth conference this month to prepare and train the  young people and to do a clean-up campaign in the host city of Cuamba. They will take the opportunity of the consecration of the bishop when the clergy will all be gathered to run a workshop for clergy on environmental ministry. They will call upon families to plant a tree at every baptism. They will do awareness campaigns and clean up campaigns in the communities.

The workshop concluded with the planting and blessing of trees donated by Anglican Social Action. 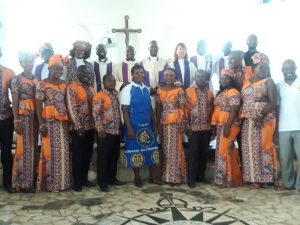