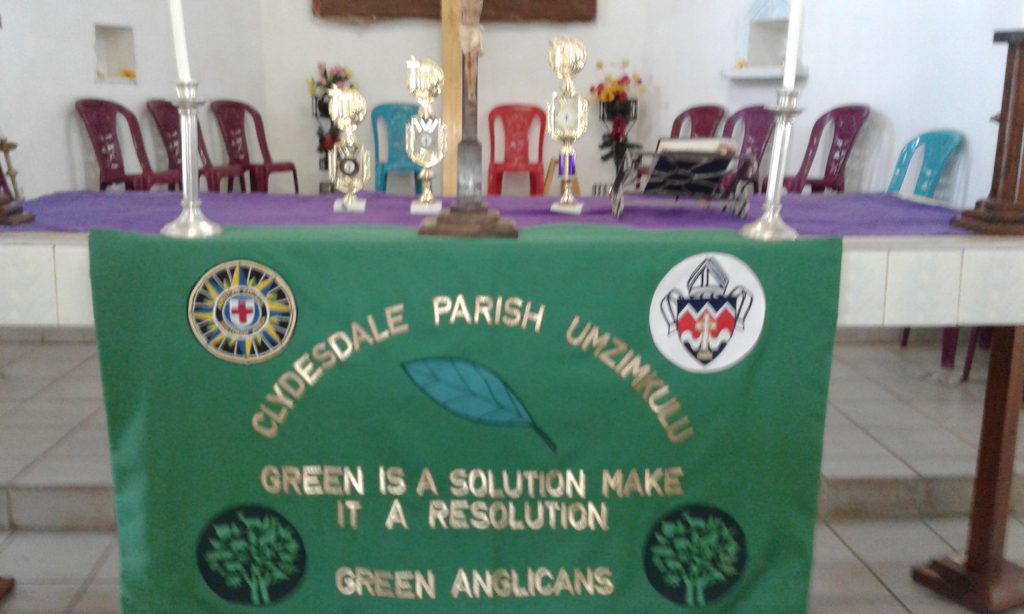 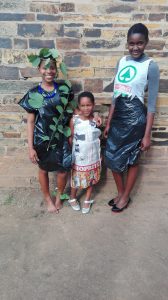 The Diocese of Umzimvubu, Clydesdale Archdeaconry, Christ the King Parish celebrated their Environment Day in an event full of activities but what was most special was the Clean Up outreach which saw parishioners young and old team up together walking down the streets of Clydesdale with plastic bags and rubber gloves for protection. Branded t’shirts written Mzimkulu Archdeaconry infront, “Green is a solution, make it a resolution” were sold as a youth fundraiser, Sunday school had theirs written “Go green, there is no Planet B” so was the cake (yummy) every bypasser could tell what was the reason for our gathering. A beautiful banner for the Green Anglicans Mzimkulu Archdeaconry was carried, and as we reached our site for cleaning up banner bearers stood facing the streets to show every car or taxi passing that Anglicans were at work.

Archdeacon Revd. Mzukisi Nomatshila shed some light as to why that particular site was chosen, he explained that where we stood was once where the water ran towards Cholwane River, that some of the church’s congregants were baptised with water drawn there. All we could see were papers an 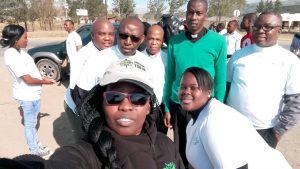 d more dirt with golden brown dry grass, he then apologised to God on our behalf as it is us humans whom create such dirt. We cleaned the area and walked towards the almost dried river below a bridge more dirt was discovered, there sat two young ladies washing clothes nearby whom when asked if they: “know the chemicals used to make soap is dangerous and endangers animals and anyone drinking the water” could only respond with a giggle as Revd. Cengimbo helped them wash.

On finishing we walked a few metres towards an open space outside a tarven where bottles were a pile up some broken. The young men at the tarven some washing cars looked shocked as they watched us cleaning the area up, that gave a clear understanding that, not only Anglicans should know about Green Anglicans Movement. Right infront of the tarven we gathered the black plastic bags and a van made 3 trips carrying bags. A series of photos were taken which is something young people enjoyed the most. We then realised we can save the planet and still enjoy doing it. Back at the church were three green bins written Paper, Glass, Plastic which stood close to the pile of black plastic bags for later sorting. 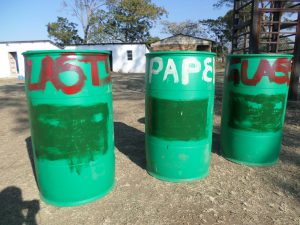 everyone, after which Miss Zoleka Mdlalo introduced visiting guests (Revd. Nkosikhona Nyikiza-Rector of St Peter’s, Revd. Swazi Matomane of St Philip’s Mfundweni, Revd. Lekena of St Faith’s kwaMthwana, Revd. Lungile Cengimbo-Archdeacon of Lusikisiki and Rector of St Andrew’s, Revd. Loyiso Zibi of St Oswald’s in Mt Ayliff-Mt Frere Archdeaconry then Miss Mandisa Gumada of kwaMsindisi-Holy Cross Archdeaconry. Mrs Nombulelo Mjoli introduced the day and briefed us on Green Anglicans. We were then treated to a feast of talent which kick started with a poem titled “I’m green” by a young lady Intle the poet, with lines like “All I examined was not exclaimed, it’s not an issue but a tissue. So do it and be witty…” Sunday school and Youth from various parishes in the archdeaconry each rendered musical items, modelling and an outdoor skit by St James outstation of Christ fhe King Parish.
Revd. Lekena the director of environmental affair in the archdeaconry encouraged all present to start walking the talk while Mrs Mjoli showed us Mother’s Union handwork in them was a beautifully crafted umbrella. After all its said and done, our host Archdeacon Revd. Mzukisi Nomatshila qouted a script from Psalm 24:1 “The earth is the Lord’s , and everything in it…” urged 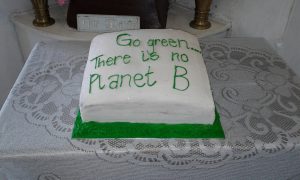 each and every indivi
dual to refrain from buying plastics everytime we go shopping but rather re-use the ones we have or save money and buy shopping bags to minimise dirt and save ourselves
money in the process.

On departure all we could do was breath a sigh of relief and say WE DID IT, so can you. Lunch was served and the yummy Green Anglicans red velvet cake!