On Mandela day (18th July) the Premier, Helen Zille, awarded the Anglican Church a flagship as part of the 110% Green initiative ran by the Western Cape Government. A flagship is given to an organisation that has made an outstanding commitment towards educating about environmental awareness as well as contributing to the green economy. 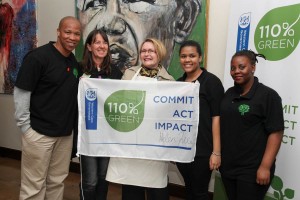 The event was held in Spier Wine Farm, Stellenbosch in collaboration with the Mandela Day 67 minutes of community service.  The Environmental Desk at the provincial office (Green Anglicans) attended the event to receive the flagship from the premier but were also involved in different groups which looked at sustainable ways of living. As a highlight of the day a “Food Forward” project was launched on the same day to “raise awareness around food wastage, catalyse action and reduce inefficiencies within the food value chain.”

Here are a few shocking facts regarding food wastage:

The project aims to encourage a reduction of food wastage in the Western Cape Province, by mobilising key stakeholders to decrease inefficiencies at every stage of THE FOOD CHAIN, from production all the way through to consumption. This project is endorsed by 110% Green initiative which encourages all Anglicans not to waste food.