The Clergy of the Diocese of the Highveld gathered for an environmental workshop facilitated by the Rev Rachel Mash, and were shocked to hear about the impact of pollution on their communities. A shocking video called “The Bliss of Ignorance” revealed how much the health of people living near coal powered plants is impacted. Mining is also causing acid mine drainage which is polluting the rivers and dirt and plastic are polluting the earth. Air, water and soil, we are surrounded by the impacts of pollution and yet God called us to be keepers of God’s earth. And that is not all, we are also pumping carbon pollution into the air and warming up the planet leading to drought, storms and sea level rise.

We looked at the theology of care for creation. Jesus did not only come to die on the cross to save human beings, he died to reconcile the whole of creation, the ‘cosmos’ . And so we are called to be missionaries in the 5th Mark of Anglican mission and to work to restore Creation . We do not inherit the earth from our ancestors, we borrow it from our children.

The clergy divided into archdeaconries to look at how they could respond to the huge challenges. The first is to develop an environmental spirituality through celebrating the Season of Creation and other environmental days, having services outside and retreats with lay leaders.

At a local level they are committed to mobilising the youth, planting trees, putting in recycling bins, reducing electricity, saving water with jojo tanks.

And on a regional level they will work with local government and other NGOs to tackle some of the huge challenges that this region faces. 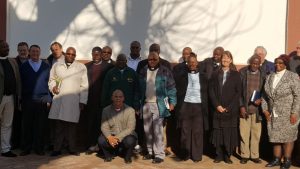