The 18th of July is Nelson Mandela’s Birthday and it has become a day when we take 67 minutes to do something for others.

This year the young people of Holy Spirit Heidveld did something to help to heal the world. They spent their morning creating a beautiful vegetable and indigenous garden at their church. They also cleaned up rubbish from around the church

Each organisastion – Sunday School, servers, youth etc will be looking after a part of the garden.

The idea of Mandela Day was inspired by Nelson Mandela at his 90th birthday celebrations in London’s Hyde Park in 2008 when he said: “It is time for new hands to lift the burdens. It is in your hands now.”

It is based on the idea that each person has the power to change the world and celebrates the  67 years that Mandela dedicated to social justice.

The United Nations officially declared 18 July as Nelson Mandela International Day in November 2009, recognising Mandela’s “values and his dedication to the service of humanity” and acknowledging his contribution “to the struggle for democracy internationally and the promotion of a culture of peace throughout the world”. 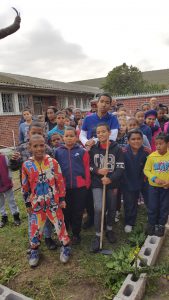